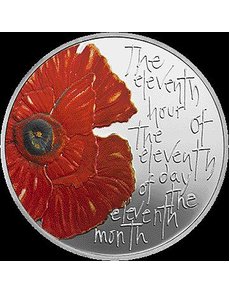 The Royal Mint revives a 2012 design for Alderney £5 coins to commemorate Remembrance Day. Emma Noble’s design pairs a poppy with a famous World War I phrase. 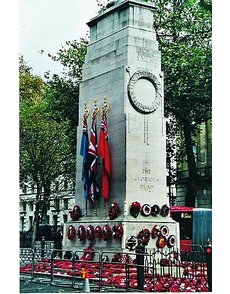 Remembrance Day is celebrated throughout the British Commonwealth with poppies and pomp, including here at the Cenotaph on Whitehall, London, in November 2004.

Photo by Chris Nyborg and courtesy of Wikipedia.

The “11th hour of the 11th day of the 11th month” in 1918 marked the conclusion of four years of bloody battle on a global scale.

The famous phrase forever linked to World War I, which began nearly a century ago, has been revived on new £5 coins for Alderney from the Royal Mint.

The saying appears next to the familiar red poppy, long a symbol of Remembrance Day (as the day is known throughout the Commonwealth; Americans call it Veterans Day). Emma Noble’s design pairing the poppy and phrase was used for similar commemorative coins for Alderney in 2012.

Noble said in 2012 when the design debuted that the time referenced in the famous phrase alluding to the war’s end is “such a powerful moment. A moment the world remembers the bravery and the sacrifice. I wanted the coin to pinpoint that moment.”

The poppy became an important symbol of remembrance worldwide after thousands of the vibrant red flowers sprang up out of the mud of the World War I battlefields of Flanders in Belgium.

“The wearing of the flower honours the commitment of those who served, and still serve, their countries, as do the highly polished military campaign medals worn by campaign veterans and serving personnel for the annual Remembrance Day parades,” according to the Royal Mint, which has struck military medals for British and Commonwealth servicemen and women since 1815.

The 2013 Alderney Remembrance £5 coins are available in Brilliant Uncirculated copper-nickel and Proof .925 fine silver versions. They have been created using trichromatic color printing techniques resulting in multiple layering of shades, which, together with the engraving, give a depth of color “that reflects the natural beauty of the flower,” according to the Royal Mint.

The obverse of the coin bears the current portrait of Queen Elizabeth II by Ian Rank-Broadley and the year date 2013.

The BU version has an unlimited mintage and is packaged in a presentation folder, while the silver version, limited to mintage of 3,000 pieces, is housed in a black case with a certificate of authenticity.

Both coins weigh 28.28 grams and measure 38.61 millimeters in diameter.