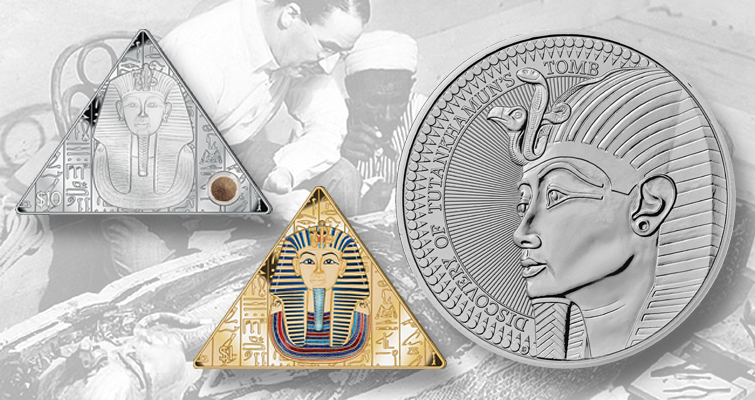 Images courtesy of the Pobjoy Mint and Royal Mint.

The Royal Mint and the Pobjoy Mint, both based in the United Kingdom, have issued new coins to celebrate the centennial of the discovery of the tomb of King Tutankhamun.

In November 1922, after years of tireless excavation in Egypt’s Valley of the Kings, the English archaeologist Howard Carter raised a candle to peer into the tomb of an ancient pharaoh called Tutankhamun.

Hidden in darkness under desert sand and rocks, the glittering treasures inside had remained undisturbed for more than 3,000 years. These artifacts have fascinated the world for a century and sparked a huge interest in Egyptian history

Although Tutankhamun may have left an impression on his people, the popularity of the young pharaoh arose on a global scale only as the result of exploration of the various royal burial grounds by Europeans, more than 3,000 years after his death.

The fascination with Tutankhamun as we know it today doesn’t stem as much from knowing a lot about the king himself as from learning the content of his tomb.

Tutankhamun’s tomb, discovered almost completely intact, consisted of four chambers, an entrance staircase and corridor, all of which were filled with an abundance of more than 5,000 artifacts including thrones, furniture, statues and the infamous “Death Mask” on his mummified remains.

Tutankhamun’s death mask was hand crafted from a sheet of gold and embellished with more than 150 ritual jewels. It was created to ceremoniously cover and protect the face of the deceased, allowing for the spirit to recognize the body in the afterlife.

The finds proved significant for archaeologists as they spurred renewed interest in ancient Egypt and the marvels of Luxor, making Howard Carter and Tutankhamun the renowned household names they are today.

The Royal Mint issued four versions of a 2022 £5 coin for the centennial.

The Uncirculated copper-nickel version has an unlimited mintage.

The Proof .9167 fine gold version has a mintage limit of 260 pieces, of which 200 were available for individual sale.

All of the coins share a reverse design by Laura Clancy, a product designer at the Royal Mint. The reverse features a profile of Tutankhamun’s iconic gold mask.

The edge inscription on the Proof precious metal versions reads THE VALLEY OF THE KINGS.

Struck in 2022, the coin bears the effigy of the late Queen Elizabeth II, “in support of His Majesty the King’s ambition for a sustainable transition,” according to the Royal Mint.

The Uncirculated copper-nickel version is available for £14.50 and the gold coin is priced at £2,975. Both silver versions sold out upon release (they were issued at £95 and £180, respectively).

The private Pobjoy Mint issued 2022 gold-plated bronze $1 and Proof .999 fine silver $10 coins, both of which are pyramid-shaped, for the centennial.

The famous mask, surrounded by hieroglyphics, appear on both coins, which were issued in the name of Sierra Leone.

The obverse of the coin features the coat of arms of Sierra Leone surrounded by hieroglyphics.

To enhance interest in the $10 coin, Taya Pobjoy, managing director of Pobjoy Mint, collected sand from the boy king’s tomb, and some of that sand is encapsulated behind a thin plate of glass in the coin. 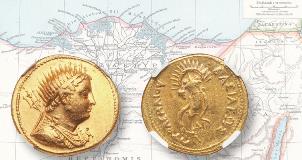 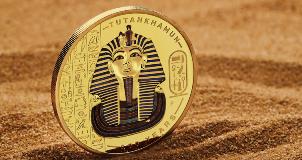