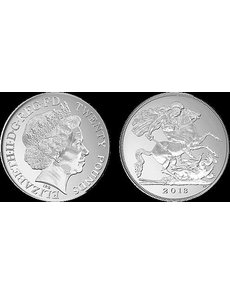 The Royal Mint is beginning a series of silver £20 coins offered at face value, based on a similar program in Canada. The first coin is issued in celebration of the birth of Prince George of Cambridge.

Though different in execution, the concept of a new coin program from the Royal Mint is familiar.

The Royal Mint on Sept. 5 announced a new series of silver coins to be offered to collectors at face value.

The initial coin in the “£20 for £20” program celebrates the Royal Birth, though nothing in the design directly references Prince George of Cambridge. The coin carries the traditional Benedetto Pistrucci reverse design of St. George slaying a dragon, with the Ian Rank-Broadley effigy of Queen Elizabeth II on the obverse.

If the program sounds familiar, it should — the Royal Canadian Mint has been offering a similar program, offering a silver Canadian $20 coin for $20, since 2011.

The Royal Mint’s silver coin has the same diameter and mintage limit as the Canadian coin, not to mention the catchy promotional slogan (denomination notwithstanding).

This is the first £20 coin in British history, according to the Royal Mint. The St. George and Dragon design, while normally associated with the gold sovereign, was most recently used to commemorate the birth of Prince George of Cambridge on a silver £5 crown.

“Given the popularity of the silver £5 crown, which sold out within five days, the new £20 coin gives those who may have missed out on obtaining the very appropriate St. George and the Dragon design first time around, a lasting memento of the royal birth at an affordable price,” according to the Royal Mint.

As with the Canadian program, the Royal Mint is limiting purchases of the coin to three per household. Sales are restricted to only those in the United Kingdom, and are only processed through the website www.royalmint.com.

The Royal Mint has not an-
nounced future designs in the program, only that the Pistrucci-designed coin is the first in a series of £20 coins to be issued periodically “to celebrate significant events and figures from British culture in the coming years,” according to the Royal Mint.

The British program, like the Canadian coin series, is intended to introduce coins to a new audience of collectors without a financial risk, since even though the coins don’t circulate, they are backed by their face value.

Collectors outside of the United Kingdom will have to search the secondary market to obtain the coins.