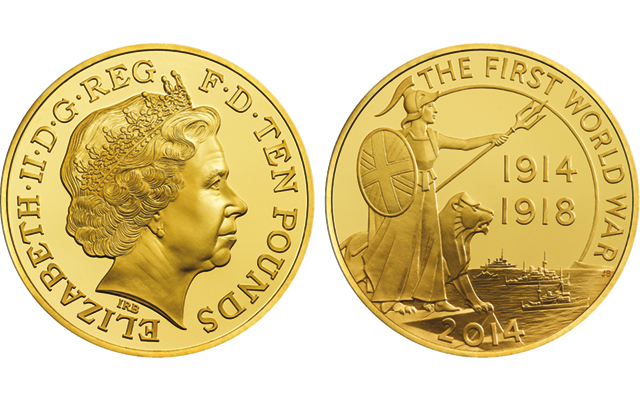 The Royal Mint commemorates the centennial of the outbreak of World War I with 5-ounce silver and gold £10 coins. The gold version is shown here. 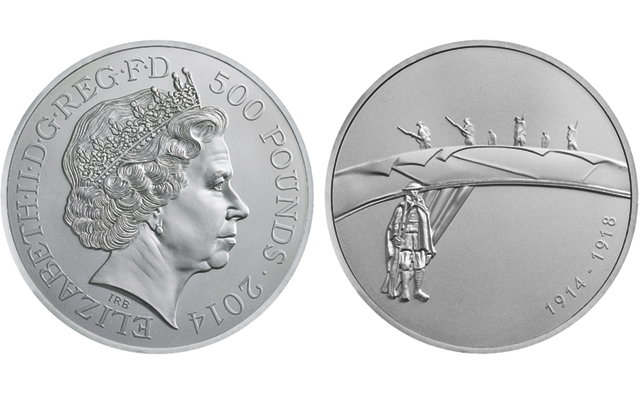 Michael Sandle designed the reverse of the 2014 kilogram silver £500 and gold £1,000 coins marking the outbreak of World War I, which shows soldiers moving from the trenches into no man’s land. The silver version appears here.

The Royal Mint in Great Britain announced June 26 that it was commemorating the centennial of the outbreak of World War I with Satin Proof 2014 .9999 fine silver and gold coins in 5-ounce and kilogram sizes.

The four individual coins are part of an ongoing, five-year program marking the war anniversary, from outbreak to armistice.

The First World War Outbreak gold and silver 5-ounce coins, which are both denominated £10, feature a reverse design by artist John Bergdahl, who has created several coin designs, most recently the coin celebrating the christening of Prince George of Cambridge.

Bergdahl’s World War I design recalls the first wave of troops departing Britain, watched over by Britannia. At her side rests a lion, guardian of Britain.

Bergdahl said in a press release: “For me Britannia embodied the true spirit of Britain at the outbreak of war, as troops began to depart for France. These were men going to fight for king and country, for Britain, and the figure of Britannia brought all that together.

“She symbolised what they fought for — including everyone at home, wives, children, families. But more than that really, it was about Britannia’s belief in them — she watches over them as they leave Britain’s shore, placing her trust in them rather than them trusting in her,” he said.

Royal Academician Michael Sandle created a “haunting” reverse for the two 2014 kilogram coins, depicting the sadness of soldiers moving from the trenches into No Man’s Land, in the form of a lonely figure of a soldier in full cape and familiar “Brodie” or “Doughboy” helmet marching through the mist, according to the Royal Mint.

In a press statement, Sandle said he “wanted to convey the sadness I felt at the tragedy of the war, the loss of so many men … and it is the human story and the sheer enormity of the tragedy that inspired me.”

Sandle’s past works often focus on the themes of war, death, destruction, inhumanity, and the work he is most proud of is Malta’s Second World War Siege Memorial, which was completed in 1992. The commision earned him the Henry Hering Memorial Medal by the National Sculpture Society of America.

The obverse of each British coin features the current coinage portrait of Queen Elizabeth II by Ian Rank-Broadley.

Each coin is presented in its own case and is accompanied by a certificate of authenticity. Each coin comes with a booklet giving a snapshot of Britain at the outbreak of war, and the inspiration behind the designs.

The kilogram coins weigh 1,005 grams and measure 100 millimeters in diameter.