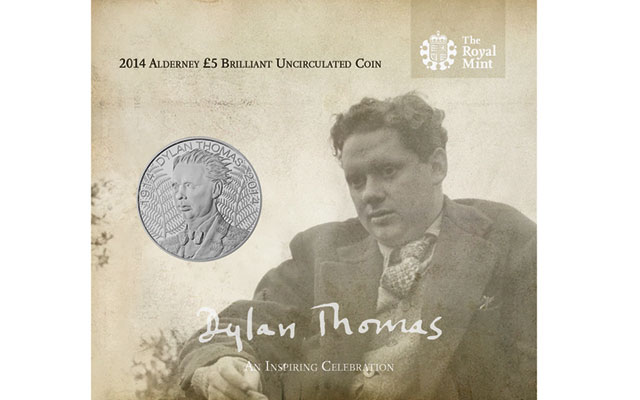 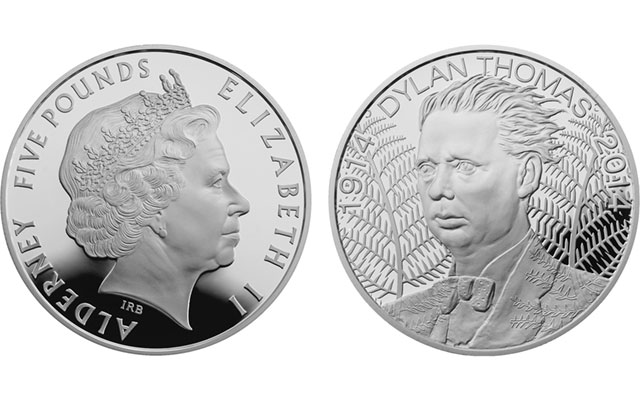 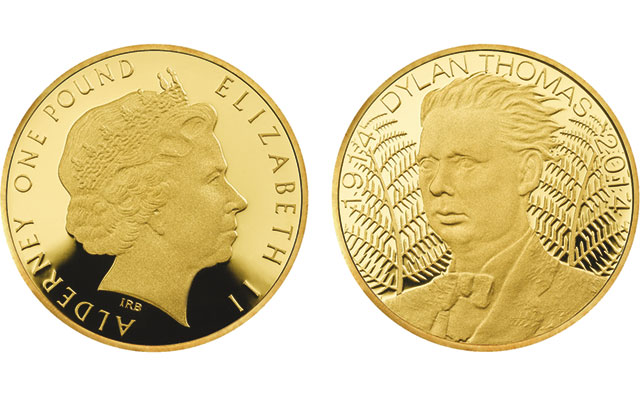 The Royal Mint has released three 2014 coins to commemorate the 100th anniversary of the birth of poet Dylan Thomas.

The Thomas coin program features a Brilliant Uncirculated copper-nickel £5, a Proof .925 fine silver £5 and a Proof .999 fine gold £1, all issued for Alderney. The coins show the writer and poet alongside symbolic references to his life and work.

Popular both internationally and his homeland of Wales (where the Royal Mint is located), Thomas’ works have been performed and enjoyed for decades, and include his most famous poem, “Do not go gentle into that good night,” and the popular tale A Child’s Christmas in Wales.

Meaning ‘son of the waves,’ Dylan’s name originates from the Welsh mythical ‘Mabinogion’ tales, according to the Royal Mint,

Senior Royal Mint engraver Lee R. Jones acknowledges that origin with waves in the reverse design reflecting Dylan’s name and the water of the Welsh landscape. Other touches, such as fernsl, frame a portrait of Dylan with his wild hair and wide eyes.

Designer  Jones said: “Dylan’s writing is so visual it has always moved me and I often return to it for inspiration. For this design I incorporated the fern, not just for its symbolism — rugged, growing and seen in the landscape of Wales —  but also to recall Fern Hill, one of Dylan’s most famous poems, to make the design accessible and hopefully inspire others to read Dylan’s work.

These commemorative coins have been created in collaboration with Hannah Ellis, the poet’s granddaughter, and an information booklet provided with each coin highlights Thomas' life and works.

The Ian Rank-Broadley effigy of Queen Elizabeth II appears on the obverse of each of the coins.

Both the BU and silver coins weigh 28.28 grams and measure 38.61 millimeters in diameter.

The gold coin weighs 1.2 grams  and measures 13.92 millimeters in diameter.

The BU coin has an unlimited mintage, and retails for £13.

The Proof silver coin has a mintage limit of 1,500 pieces and retails for £80.

For more information, or to order the coins, visit the Mint website or write to the Royal Mint, FREEPOST, NAT23496, P.O. Box 500, Llantrisant, Pontyclun CF72 8YT.