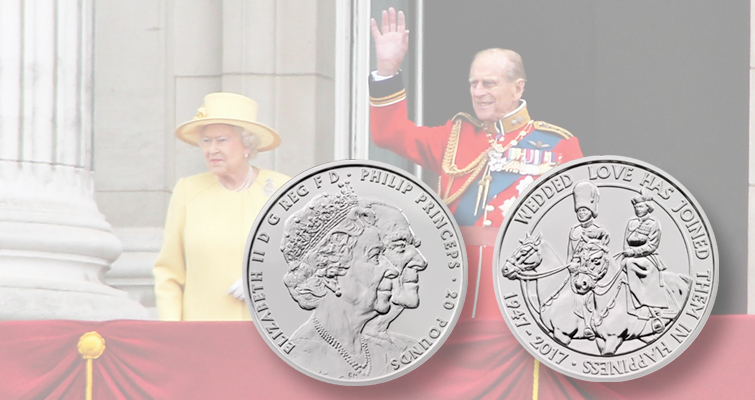 The most affordable Platinum Wedding coin in the Royal Mint collection is the Proof .999 fine silver £20 coin being sold at face value and sporting the royal couple on horseback on the reverse.

The marriage of Queen Elizabeth II and Prince Philip may be the ultimately celebrity marriage, but it offers one thing many other famous unions do not — longevity.

In 2017 as the royal couple celebrate 70 years of marriage, The Royal Mint is recognizing that personal milestone, a platinum wedding anniversary, with a range of 11 different coins struck for the occasion.

Nov. 20, 2017, is the anniversary date of the marriage of Queen Elizabeth II and Prince Philip, Duke of Edinburgh, at Westminster Abbey in front of 2,000 guests. The service was broadcast live to 200 million radio listeners, a welcome occasion for celebration amid the post-war austerity of 1947. The Queen saved ration tokens to buy the material for her dress, and she applied her own makeup on the big day.

rNow, 70 years later, as the first British royal couple to celebrate a platinum wedding anniversary, a latest chapter in the story of the longest royal marriage in British history, their enduring partnership is an inspiration to all, and Britain celebrates the unique personal moment along with them.

Three original designs were created for the occasion, including two different portraits of the couple, as is traditional on special wedding anniversaries for Queen Elizabeth II and Prince Philip.

The obverse of all the coins showcases the new joint effigy designed by Etienne Millner, head and shoulder busts of the royal couple. According to the Royal Mint, “The leading figurative sculptor’s combined portrait represents a sense of duty, with Prince Philip supporting The Queen in his role of royal consort.”

Millner is a fellow of the Royal British Society of Sculptors and past president of the Society of Portrait Sculptors.

John Bergdahl created the two reverse designs used for the coins in the Platinum Anniversary release. He has worked on many commissions for the Royal Mint, marking both royal and historical events and anniversaries.

His reverse portraying the couple, each on horseback, captures the royal couple’s mutual passion for all things equestrian.

Bergdahl’s second reverse design for the series, pairing two shields, reflects the heraldic lineage of both families at the time of their union.

Bergdahl’s equestrian design is used for four different £5 coins and one £20 coin.

Specifications, mintage limits and prices vary but are available at the Royal Mint website. 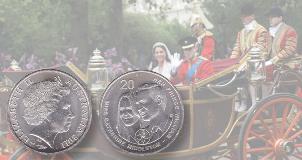 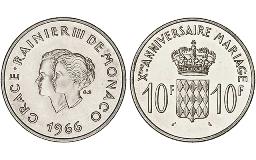 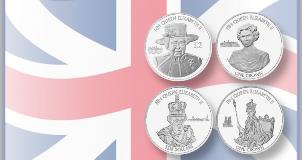