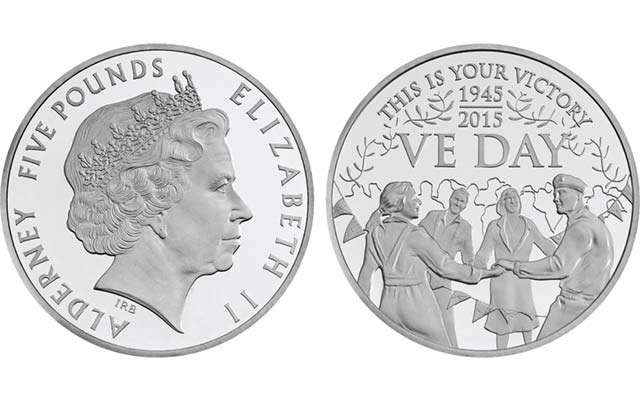 A Proof 2015 £5 platinum coin from Alderney, struck by the Royal Mint, marks the 70th anniversary of Victory in Europe following World War II.

Britain's Royal Mint has issued a Proof 2015 platinum £5 coin for Alderney to commemorate 70 years since the moment in May 1945 when World War II hostilities in Europe finally ceased and “Victory in Europe” was declared.

During six years of war, the lives of billions of people across the globe were affected, and war truly stretched across the world.

Finally, at 7:40 p.m. on May 7, 1945, the Ministry of Information in London issued a short statement confirming that war in Europe was over: “In accordance with arrangements between the three great powers, tomorrow, Tuesday, will be treated as Victory in Europe Day and regarded as a holiday.”

Tens of thousands of people flooded the streets of London to celebrate in an outpouring of relief and joy, congregating in Trafalgar Square, Piccadilly Circus and filling The Mall. The following day, May 8, “Victory in Europe” Day saw the festivities continue. Street parties were organized across the country.

Jones said: “The remembrance of the Second World War isn’t just about the great historical figures, the leaders, the politicians, the generals. It’s about the sacrifice and struggle of the ordinary people. This was a war with a terrible reach, extending far beyond the frontlines and battlefields. 50 million people lost their lives, millions more were injured. Every family experienced loss or hardship and contributed to the war effort in some way.”

Jones continued: “The design for this coin drills down to street level on that welcome day when war in Europe was finally over. I hope I have given a glimpse into a personal window, to a country that was battered and bruised, but finally able to erupt in a carnival of celebration and reclaim those bombed out streets for a party to end all parties, their freedom and identity secured.”

An inscription on the coin’s reverse comes from Sir Winston Churchill, and reads, “This is your victory.”

To order the coin, visit the Royal Mint’s website.