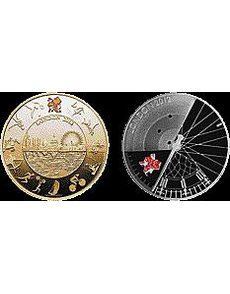 The Royal Mint on Nov. 14 unveiled designs for what it calls the official London 2012 Olympic and Paralympic Games coins.

The previously unannounced £5 coins, each offered in multiple finish and compositional versions, join a series of 62 official designs in a series introduced in 2008 with the handover of the Summer Games from Beijing to London, including 29 circulating 50-pence coins, four Countdown coins, nine gold coins, 18 silver Celebration of Britain coins and two 1-kilogram coins. Some coins are also offered in multiple versions, and several of the coins remain to be released as the 2012 Games approach.

Saiman Miah, a 24-year-old from Birmingham, designed the official London 2012 Olympic £5 coin. His design features the London skyline and the River Thames, with pictograms of athletes placed around the outside of the design like a clock face, representing one of London’s greatest icons, Big Ben. Other iconic buildings depicted include Westminster Abbey, the Gherkin, St. Paul’s Cathedral, the London Eye and the Tower of London.

Miah is currently studying for his master’s degree at the Birmingham School of Architecture.

Pippa Sanderson, of Malvern, Worcestershire, and who recently graduated with a first class honors degree in graphic and media design at Hereford College of Arts, won the competition to design the official £5 coin for the London 2012 Paralympic Games.

Sanderson’s design celebrates accuracy, maneuverability and speed and includes the face of Big Ben to represent London; the spoked wheel represents maneuverability, a target signifies accuracy and a stopwatch indicates speed. Completing the design is the London 2012 Paralympic emblem.

All coins feature the Ian Rank-Broadley effigy of Queen Elizabeth II on the obverse.

In addition to their major design elements, the reverses of the new £5 coins sport the respective 2012 Games logo with a colorful Union Jack flag infill.

All of the £5 coins measure 38.61 millimeters in diameter, with the copper-nickel and Proof .925 fine silver versions weighing 28.28 grams each (the weight of the gold-plated silver version is listed as the same as the standard or unplated version); the piedfort silver version weighs 56.56 grams, and the Proof .9167 fine gold coin weighs 39.94 grams.

The BU copper-nickel versions, which have an unlimited mintage, are offered at £14.99 each, packaged in a display pack featuring information on the design and specifications.

Mintage limits for the Proof piedfort silver versions also differ, with the mintage for Paralympic coin at a maximum 2,012 pieces and the Olympic design capped at 7,000 pieces. Both coins are presented in a display case with certificate of authenticity and priced £175 each.

The Proof gold-plated silver version, which is presented in a complimentary case with a certificate of authenticity, has a maximum mintage of 12,500 coins; their price is £125 each.

Shipping and handling are an additional charge for all ordering options.

All prices are listed in British pounds. American and Canadian buyers will pay a price based on the prevailing exchange rate at the time of purchase.