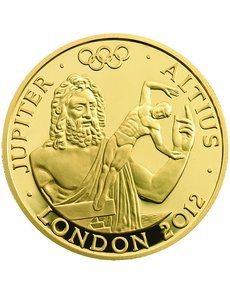 Jupiter, the god of light and the sky, watches over a diver on the £100 coin in the second release in the Faster, Higher, Stronger series of nine gold coins from the United Kingdom. 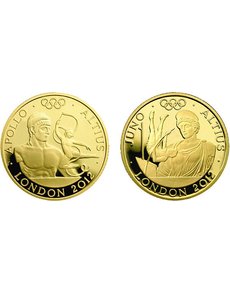 New gold coins celebrating the 2012 London Olympic Games pair ancient Roman gods with different Olympic sports. Two £25 coins celebrate Juno, the queen of the gods, with a pole vaulter, and Apollo, the god of sun and the arts, overlooking a rhythmic gymnast.

As with each subset of the series, the second offering features two quarter-ounce £25 coins and a single 1-ounce £100 coin. The Proof .9167 fine (22-karat) gold coins of each denomination feature reverse designs inspired by the classical heritage of the Olympic Games in combination with modern sporting achievement. Each coin features a different Roman god reflecting the theme of the second part of the Olympic motto.

Juno, the queen of the gods, is depicted alongside an athlete pole vaulting on one of the £25 coins, with Apollo, the god of sun and the arts, overlooking a rhythmic gymnast on the other £25 coin. Jupiter, the god of light and the sky, watches over a diver on the £100 coin.

The gold Higher-theme coins are offered in several individual and group options.

Three-coin and nine-coin sets are available in limited numbers. Four thousand three-coin sets are offered for £2,349 each, with a maximum of 1,000 sets of all nine coins in the Faster, Higher, Stronger series to be sold. A partial set offering the first six coins released is priced at £4,698, with the option to purchase the remaining three coins in the set for an additional cost when they are released later.