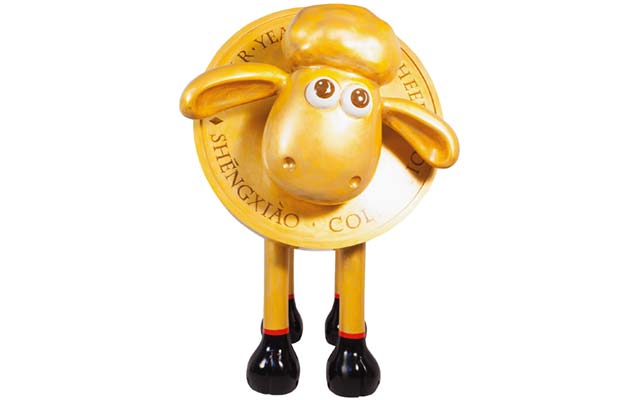 A Shaun the Sheep statue created by the Royal Mint will help raise money for a London charity. 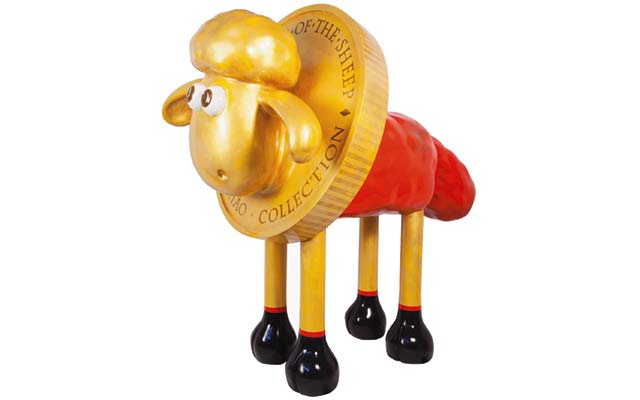 The Royal Mint’s Shaun the Sheep statue is placed near the Tower of London, where the Mint was located for more than 500 years.

The Royal Mint announced March 27 that it is one of the sponsors of a "ewe-nique" art trail taking place across London to raise money for United Kingdom children’s hospitals.

For the next eight weeks only a flock of 50 five-foot tall sculptures of Shaun the Sheep will be trotting the streets of London for the "Shaun in the City" art trail — including one very special "Shaun" which has been created by The Royal Mint.

High-profile artists, designers and celebrities have designed and decorated the colourful sculptures which will stand at iconic landmarks, attractions and locations throughout the capital including Covent Garden, Trafalgar Square, Carnaby Street, St Paul’s Cathedral, and The View from the Shard.

The Royal Mint’s sponsored sculpture "Shaun-xiào" is located at a very fitting location — The Tower of London, where the mint once resided for more than 500 years from the late thirteenth century until 1812.

The "Shaun in the City" trail will run across London from 28 March to 25 May followed by a second trail across Bristol, featuring 70 different Shaun sculptures, from 6 July to 31 August.

Following both trails, all 120 "Shauns" will be sold off at a public auction in October. The money raised will go towards the Wallace & Gromit Children’s Foundation, which supports sick children in hospitals throughout the UK.

The Royal Mint took part in the Wallace & Gromit Children’s Foundation "Gromit Unleashed" trail across Bristol in 2013, which raised over £2.3 million for Bristol Children’s Hospital, and the organisation’s "National Treasure" sculpture will be displayed in the new Royal Mint Visitor Centre which opens in spring 2016.

The Royal Mint’s director of commemorative coin and medals, Shane Bissett, said: “We were offered the fantastic opportunity to take part in another ‘Aardman Adventure’ and jumped at the chance to show our support for such a worthy cause. In 2014 The Royal Mint struck the United Kingdom’s first Chinese Lunar Calendar coins for the Year of The Horse beginning a new series, the Shangxiào Collection, named to honour the Chinese zodiac. The series continues in 2015 with gold and silver coins struck for the Year of the Sheep, and we wanted to transform Shaun into the star of our Shangxiào Collection to celebrate his special year and Chinese Lunar New Year.

“‘Shaun-xiào’ has been created by one of The Royal Mint’s own in-house design team, Stephen Taylor, and features elements of our Lunar Year of the Sheep design, including the Chinese symbol for ‘Sheep’, a large coin ruff around Shaun’s neck and red fleece to symbolise the gift envelopes which are exchanged at Lunar New Year. I hope that he enjoys his trip to Tower of London, and that visitors enjoy meeting him!”

Director of Wallace & Gromit’s Children’s Foundation, Nicola Masters said: “The ‘Gromit Unleashed’ trail was an incredible success, raising £2.3million for the charity at auction and attracting more than 1.2 million visitors to Bristol, which contributed over £123 million to the local economy. Following this, we wanted to bring our next project to both London and Bristol, so that even more people could get involved and enjoy our fantastic flock of sculptures. We’d like to thank The Royal Mint and the rest of our sponsors for helping us to make the trail happen, and bringing Shaun to the big city!”

Creator of Shaun the Sheep, Nick Park CBE said: “It’s been a busy year for Shaun, he has just launched his first movie and now he has his very own arts trail! Shaun is such a well-loved character with so many fans around the globe, I am sure many will flock to London to be part of the fun.”

Have you been to see Shaun-xiào at The Tower of London?