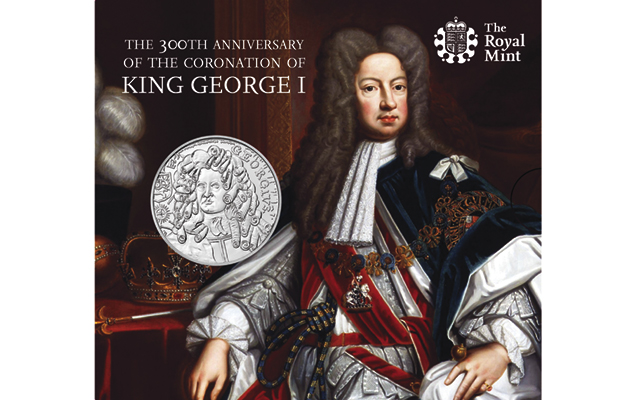 A new £5 coin from Alderney marks the 300th anniversary of the coronation of King George I. The Brilliant Uncirculated copper-nickel coin has unlimited mintage and comes in a colorful booklet. 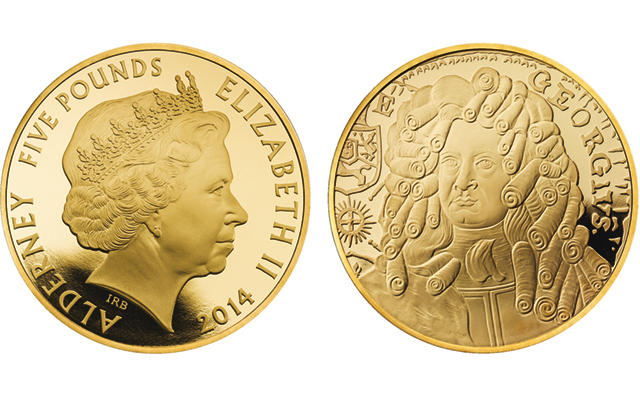 The Royal Mint is issuing no more than 100 examples of the Proof .9167 fine £5 coin for Alderney to honor the anniversary of King George I’s coronation.

The Royal Mint’s latest coins celebrate the coronation anniversary of a king of England who barely spoke English.

The Royal Mint on Aug. 29 released three new 2014 £5 coins marking the 300th anniversary of the coronation of King George I. The coins, issued for Alderney, carry the same design, but are available in varying metals, finishes and weights.

The death of Queen Anne on Aug. 1, 1714, left the country without a direct heir, her closest blood relative being the Catholic James Stuart, son of the overthrown James II. However, the Act of Settlement (which was passed in 1701) blocked accession by a person of the Roman Catholic faith in order to ensure a Protestant ruler.

Sophia, Electress of Hanover, was expected to succeed Anne, but Sophia’s death two months earlier positioned her eldest son, George, Elector of Hanover, to inherit the throne instead. As King George I, he brought the Stuart dynasty to a close and opened the Hanoverian era.

George’s coronation was held at Westminster Abbey on Oct. 20, 1714, and much of it had to be conducted in Latin, as the German-speaking George spoke little English, whereas his ministers spoke little German.

“King George wasn’t known for being outspoken so there were few quotes directly from him to gain an insight into his personality — only what the history books have written, and they were quite mixed reviews,” she said, in a press release. “I used portraits to inspire my design, so it was a challenge working from other people’s interpretations of him. One continual theme was the ‘periwig,’ so that features prominently in my design. Every curl was a labor of love!”

King George reigned during the fixing of the value of the guinea, a significant change to the coinage, so Noble included the quarter-guinea in her design.

During George I’s reign, Sir Isaac Newton was master of the mint, and in 1717 a Newton report called for the value of the guinea to be fixed to 21 shillings. Fractional quarter-guineas (worth 5 shillings, 3 pence) were issued in 1718, intended to relieve a shortage, but fewer than 40,000 were struck, and the coin was not well-received so mintage of the denomination was halted.

The quarter-guinea bore John Croker’s portrait of King George I on its obverse, while the reverse was decorated with a cruciform arrangement of the Royal Arms.

All of the £5 coins measure 38.61 millimeters in diameter and have a milled edge.

The BU coin comes packaged in a colorful folder, has an unlimited mintage and retails for £13, with the silver version limited to 1,714 coins, offered for £80 each. The gold coin has a mintage limit of 100 pieces and costs £1,800.