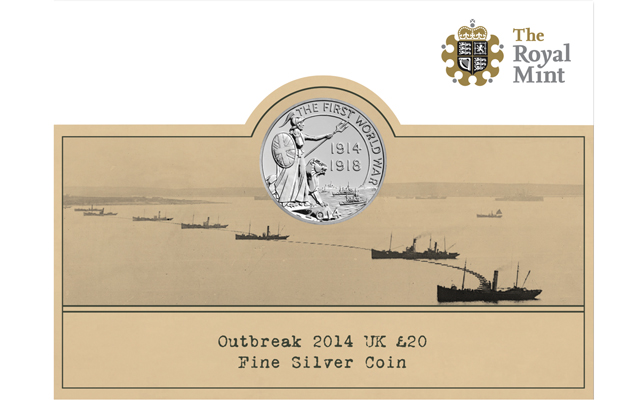 The Royal Mint has launched its second silver “£20-for-£20” coin, which marks the centennial of the outbreak of World War I.

The Royal Mint has unveiled the design for its second silver £20 coin sold at face value.

The Brilliant Uncirculated 2014 .999 fine silver coin commemorates the outbreak of World War I.

The Royal Mint on July 8 released images and began selling the coin, which features a design used for silver and gold £10 coins released June 26.

The reverse, created by sculptor John Bergdahl, shows Britannia watching over the first troops leaving for France at the start of the war.

In a press release, Bergdahl said he drew inspiration from two sources: the South African Medal for war services and the World War I memorial plaque awarded for those who died.

The coin weighs 15.71 grams, measures 27 millimeters in diameter and has a mintage limit of 250,000 pieces, the same as the first coin in the program. The first “£20-for-£20” coin, released in October, honored the birth of Prince George of Cambridge and sold out its mintage.

Sales are limited to five per household. Shipping is an additional cost.