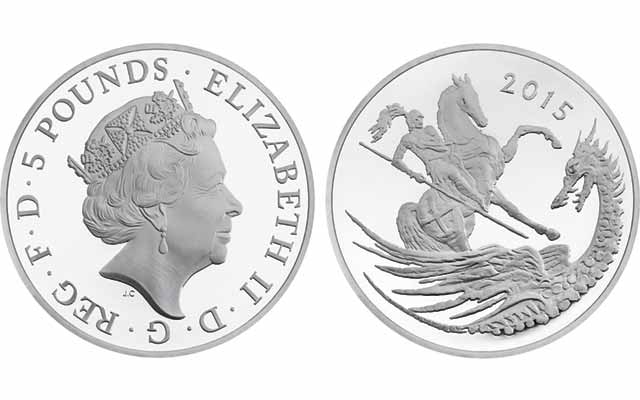 The Royal Mint is issuing a 2015 Proof .925 fine silver £5 coin to mark the second birthday of Prince George of Cambridge.

The Royal Mint has struck a special edition United Kingdom Proof .925 fine silver £5 coin to mark the July 22 second birthday of Prince George of Cambridge. The coin bears a contemporary reimagining of the St. George and the dragon legend in a design by artist Christopher Le Brun.

Approved by the Duke and Duchess of Cambridge, Queen Elizabeth II and the Chancellor of the Exchequer, the new silver £5 coin is restricted to a limited mintage of just 7,500 coins. The obverse of the coin features the new, current portrait of Queen Elizabeth II by Jody Clark.

This is the third year in the row that the royal has been honored with silver coins from the Royal Mint, following coins celebrating his birth in 2013 and coins marking his first birthday in 2014.

St. George is a familiar figure on British coinage, first appearing on English coins with the George nobles — gold coins issued during the reign of Henry VIII.

The classic St. George and the Dragon design created by Benedetto Pistrucci in 1817 has graced the coins of almost every monarch since George III, and Christopher Le Brun’s composition applies a dynamic new approach to the portrayal of the classic tale.

The Royal Mint will also be minting limited edition “strike on the day” sovereigns to commemorate the young prince’s birthday — the St. George and the Dragon design has usually featured on this flagship coin of the Royal Mint since the denomination's reintroduction in 1817.

Shane Bissett, Director of Commemorative Coin and Bullion at the Royal Mint said: “The choice of the St. George design to honour Prince George’s birthday is an apt one — the name George has long had links with the British monarchy and its coinage, there having been six Kings of that name during the Royal Mint’s 1,000 year history."

For the birth of Prince George on July 22, 2013, the Royal Mint struck a limited number of 10,000 special silver coins to mark the occasion, which were so popular that they sold out within days.

RELATED: Which other nations have issued coins celebrating Prince George?

President of the Royal Academy since 2011, Christopher Le Brun has undertaken a number of commissions for the Royal Mint. These include the 2007 Britannia bullion coin, the 50-penny celebrating the 250th anniversary of Kew Gardens and, more recently, the Pegasus design that graced the five-ounce gold and silver Proof coins, issued to mark the occasion of the Olympic Games held in London during 2012.

The official 2015 £5 coin commemorating the second birthday of Prince George of Cambridge weighs 28.28 grams and measures 38.61 millimeters in diameter.

The coin may be ordered now from the Royal Mint and retails for £80.