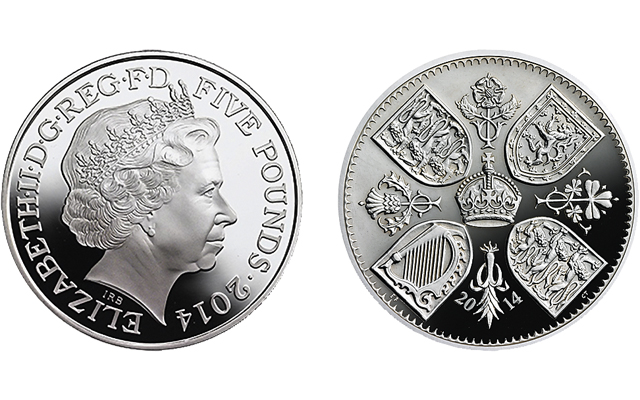 The Royal Mint is celebrating the first birthday of Prince George of Cambridge with a collectible Proof silver £5 coin.

Most babies get cake for their birthday, but Prince George of Cambridge in the United Kingdom will receive a coin.

The Royal Mint announced June 16 that the prince, the son of the Duke and Duchess of Cambridge, will be honored with a Proof .925 fine silver £5 coin for the July 22 birthday.

The reverse of the coin will show the “seldom-seen” heraldic Royal Arms design, according to the Royal Mint. The design was originally created for Prince George’s great-grandmother Queen Elizabeth II.

The coin has been approved by the Duke and Duchess of Cambridge, Queen Elizabeth II and the chancellor of the Exchequer.

The design echoes heraldic elements that have been seen on coinage for more than 300 years, and has only been featured once on coinage since the queen’s coronation in 1953, on a £5 coin struck for the British Exhibition in New York in 1960.

The cruciform arrangement of the Royal Arms — four shields representing the nations of the United Kingdom arranged in a cross — is interspersed with floral emblems of the rose, shamrock, thistle and leek. It was seen as a modern and contemporary heraldic design when it was first created, according to the Royal Mint.

The official first birthday £5 coin is available now to pre-order from the Royal Mint’s and is priced at £80.