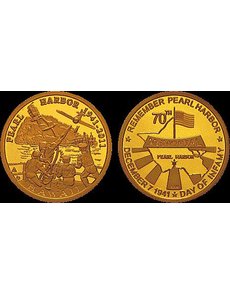 The Royal Hawaiian Mint has struck bronze and silver medals commemorating the 70th anniversary of the Japanese attack on Pearl Harbor. Proceeds will benefit the Pearl Harbor Survivors Association. Shown is the bronze commemorative.

The obverse of the commemorative portrays the life and death battle from the deck of the USS Nevada with the stricken USS Arizona in the background. An officer points to the incoming dive-bomber as two Navy sailors return fire with a .30 caliber Browning water cooled machine gun.

The reverse features the USS Arizona Memorial in the center with the U.S. flag surrounded by an outline of the island of Oahu with Pearl Harbor. The Imperial Japanese flag is shown upside down, symbolizing Japan’s defeat. The legend includes the World War II battle call REMEMBER PEARL HARBOR.

A combined silver and bronze set is also available for purchase for $99.

Orders must be received or postmarked by Dec. 7, 2011, for delivery by Christmas. ¦