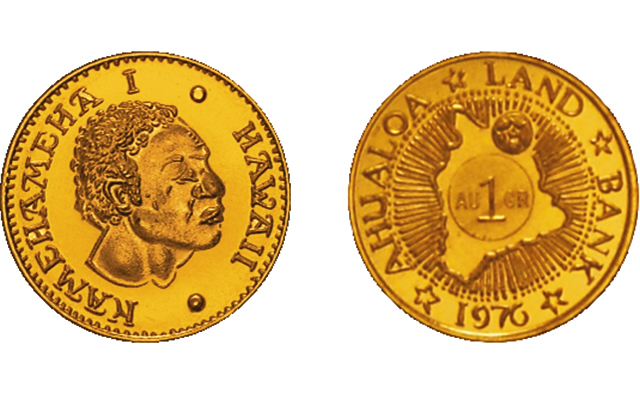 Kamehameha and the Ahualoa Land Bank are featured on the obverse and reverse of this gold piece from 1976. A copper piedfort version is now available. 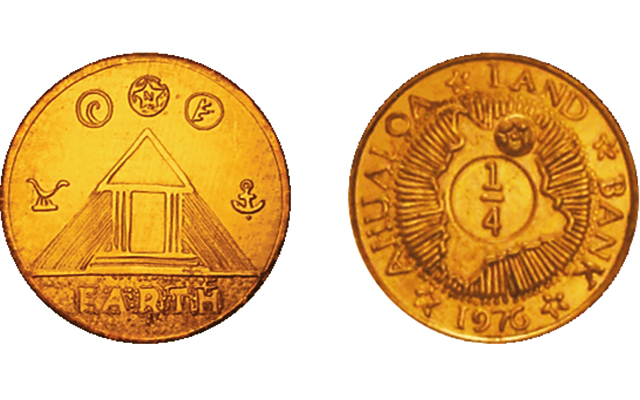 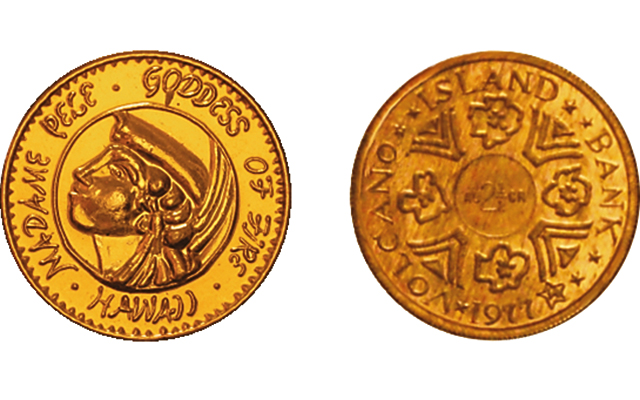 Madame Pele is featured on this gold piece from 1977. The reverse is a Volcano Island Bank design. A copper piedfort version is newly available. 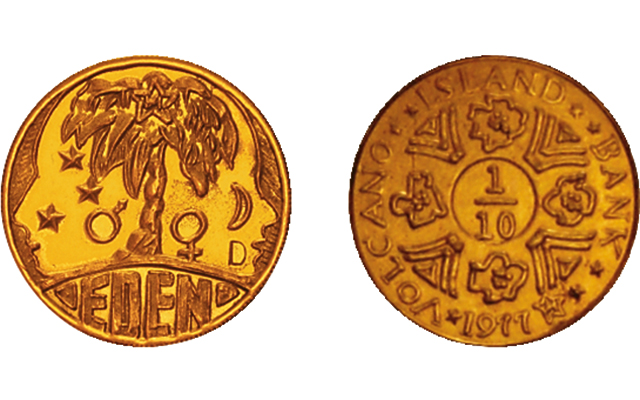 Another 1977 gold issue was one with the Eden obverse. A new copper piedfort version is available. 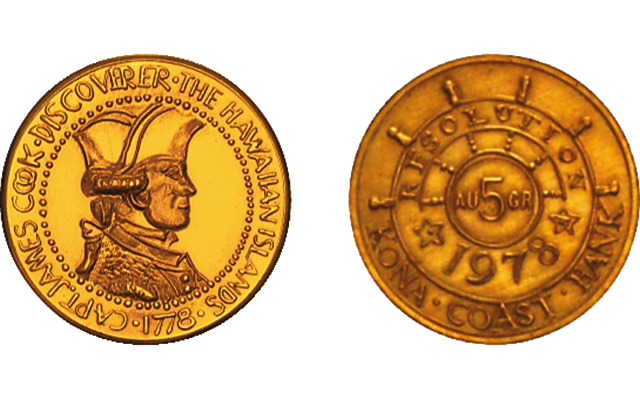 The commander of the first European mission to the Hawaiian islands, Capt. James Cook, is featured on the obverse of this piece originally issued in 1978. A copper piedfort version is newly available. 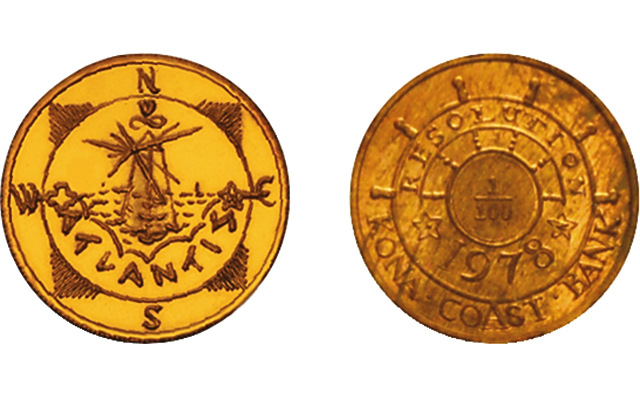 The Atlantis obverse was employed for this gold piece originally struck and released in 1978. A copper piedfort version is newly available.

To mark the 40th anniversary of its founding, the Royal Hawaiian Mint is issuing a limited-edition six-piece Proof piedfort set of medals in copper featuring designs struck from the original hand-cut dies from 1976, 1977 and 1978.

??A medal with a Kamehameha obverse, paired with an Ahualoa Land Bank reverse that was originally used for a 1976 1-gram .9999 fine gold piece.

??A medal with an Earth obverse design, paired with an Ahualoa Land Bank reverse that was originally used for a 1976 quarter-gram .9999 fine gold piece.

??A medal with a Madame Pele obverse, paired with a Volcano Island Bank reverse that was originally used for a 1977 2.5-gram .9999 fine gold piece.

??A medal with an Eden obverse design, paired with a Volcano Island Bank reverse that was originally used for a 1977 tenth-gram .9999 fine gold piece.

??A medal with a Capt. James Cook obverse, paired with a Kona Coast Bank reverse that was originally used for a 1978 5-gram .9999 fine gold piece.

??A medal with an Atlantis obverse design paired with a Kona Coast Bank reverse originally used for a 1978 piece hundredth-gram .9999 fine gold piece.

The medals were designed to contain the specific amount of gold as stated in the reverse inner dies.

Only 40 sets containing the six 21-millimeter Proof copper piedfort medals in a special display case will be issued in commemoration of the Royal Hawaiian Mint’s 40th anniversary. The sets will be offered for $299 per set.

The three figures featured separately on the obverses are united by a common reverse that features the British flag, a tiki god and a Hawaiian volcano. Medals bearing the three different die pairings are available individually and in a three-medal set.

A boxed Proof 1-ounce .999 fine silver dala of each obverse design is available online for $79 each, limited to an edition of 100 of each design in an individual product option. For each medal, a mintage of 200 is being struck — 100 each for individual sales and 100 for sets.

Customers placing the first 100 orders overall online will receive a free 1999 silver commemorative medal marking the Royal Hawaiian Mint’s 25th anniversary. The 1999 medal bears the Kamehameha the Warrior design, depicting the ruler as he appeared at the time he united Hawaii and established the Kingdom of Hawaii in 1795.

The NotHaus Mint was established Sept. 11, 1974, by Bernard von NotHaus and Talena Jay Presley “to provide a gold coinage for the community of Ahualoa on the Big Island of Hawaii.”

Production of the “Shelter System” medals started on Nov. 7, 1975, with the striking of two gold Kamehameha coins on Abe Chong’s press in Honolulu.

“The Shelter System” referred to the symbols in the “Earth” design, which was one of the reverses for the King Kamehameha coins, Presley said.

The design was referred to as “The Shelter System” in the economic research paper that von NotHaus wrote in 1974 called “To Know Value.”

The name of the company was changed to “The Hawaiian Mint” on July 5, 1976, though there was no change of ownership, according to Presley.

After an ill-fated bullion project with two partners failed in 1985, according to Presley, The Hawaiian Mint filed for bankruptcy on Jan. 15, 1986.

Again, there was no change of ownership until 2010, when Bernard von NotHaus ceased to be an owner, Presley said.

Since 1999, the Royal Hawaiian Mint has been owned by a trust, with Presley as chief executive officer.

Von NotHaus has not held any ownership interest in the Royal Hawaiian Mint since 2010, according to Presley.

Complete information on the Royal Hawaiian Mint’s history and past issues can be found on the firm's website.