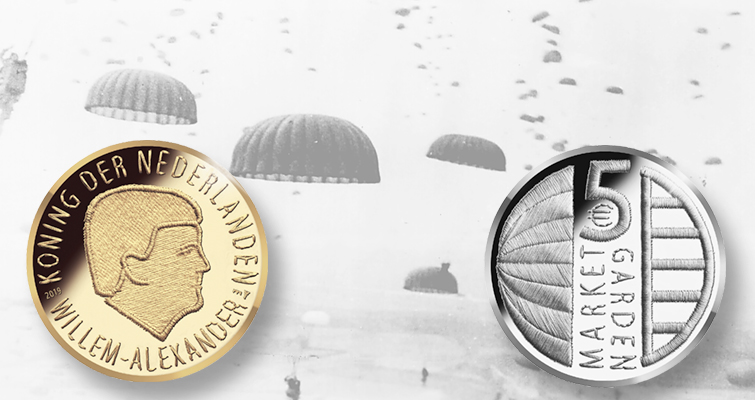 The Royal Dutch Mint is issuing three 2019 coins in commemoration the 75th Anniversary of Operation Market Garden. This includes a silver €5 and a gold €10.

Operation Market Garden was an ultimately unsuccessful effort 75 years ago to retake Nazi-controlled land in the Netherlands.

The Royal Dutch Mint is issuing three 2019 coins in commemoration the 75th Anniversary of Operation Market Garden, and in tribute to the soldiers who fought in the biggest battle on Dutch soil during World War II.

Just three months after D-Day, a plan was conceived by British Field Marshal Sir Bernard Montgomery that would become the largest airborne operation in history.

The goal of the Allies was to employ 10,000 paratroopers to take the strategic bridges spanning the Maas, Waal and Rhine rivers in the cities of Eindhoven, Nijmegen, and Arnhem, and to push through to Berlin to end World War II before Christmas of 1944. The plan’s urgency was because the Allies did not want to give the Germans time to regroup and strengthen after their retreat from France.

Things did not go as planned and the Allies failed to secure a foothold over the Rhine at Arnhem. They held Arnhem for four days despite being outnumbered two to one. Of the 10,000 soldiers who landed at Arnhem, some 1,400 were killed and 6,000 taken prisoner.

In tribute to the soldiers who fought in this biggest WWII battle on Dutch soil, the Netherlands Ministry of Finance authorized the Royal Dutch Mint to issue gold, silver, and silver-plated commemorative coins.

The coins show King Willem Alexander on the obverse, while the reverse is inspired by symbols of the operation: a parachute and the bridge over the Rhine. The entire design, including the lettering, is executed in a style reminiscent of embroidered patches and emblems on military uniforms.

The Uncirculated silver-plated copper €5 coin measures 29 millimeters in diameter and has a mintage limit of 15,000 pieces. Each is presented in a colorful coin card and priced at $19.75.

The coins are available from the North American distributor, the Coin & Currency Institute. To order, visit the distributor website. 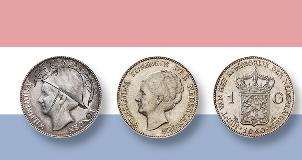 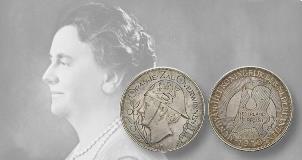