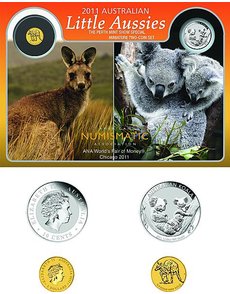 Images courtesy of the Perth Mint and www.TalismanCoins.com. 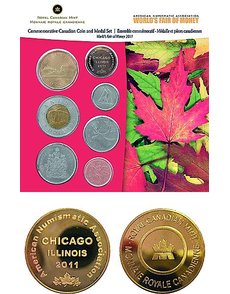 The Royal Canadian Mint offered at the 2011 World’s Fair of Money a special set of Uncirculated examples of six circulating coins plus a medalet available only in the set. With a mintage of 500 sets and a retail price of $15, the set sold out quickly.

About one dozen world mints were in attendance during the American Numismatic Association World’s Fair of Money in Rosemont, Ill., and several of them offered special sets for collectors.

The Perth Mint in Western Australia and the Royal Canadian Mint were among the mints with a special set available for sale to those attending the show. Both mints released show-specific sets earlier in 2011 for the World Money Fair in Berlin, but the makeup of those sets is different than the ANA sets for 2011.

Two precious metal coins are offered in the Little Aussies set from the Perth Mint. The set is limited to an edition of 2,000. The Perth Mint offering is still available from official distributors.

The Koala coin, denominated 10 cents, made its debut earlier this year as an extension of the silver bullion series. A bright-eyed baby joey watches viewers from the fork of a gum or eucalyptus tree, while itself being observed by the watchful eye of the mother koala. The scene appears on the reverse of the silver coin, which was designed by Elise Martinson.

The Kangaroo coin in the set is a much smaller version than the standard 1-ounce size.

The reverse of the coin in the set shows an adult kangaroo paused in a classic pose in the Australian outback by designer Wade Robinson. The Kangaroo coin is denominated $2.

Both coins carry legends indicating their fineness and purity, as well as the Perth Mint’s “P” Mint mark.

The Ian Rank-Broadley effigy of Queen Elizabeth II appears on the obverse of both coins in the set.

On the packaging, the ANA logo appears with images of the animals shown with each respective design, as well as text reading “2011 Australian Little Aussies,” “the Perth Mint show special” and “miniature two-coin set.” Additional text reads “ANA World’s Fair of Money Chicago 2011.”

The original show issue price was $60, with the price rising after the show.

Distributor Talisman Coins has the Perth Mint show set for $74.95. Shipping is an additional charge per order.

Circulating coinage features in the Royal Canadian Mint’s set, which also includes a small medal unique to the set.

The six-coin set contains one Proof-like (Uncirculated) example of each circulating coin, from cent to the $2 piece, except for the 5-cent coin.

Joining the coins in the set is a copper medalet that, on one side, marks the show with text reading american numismatic association aligned in a partial circle along the periphery of the design, with chicago illinois 2011 in three lines at center, with an arrangement of maple leaves at the bottom (RCM officials have not stated which side is obverse or reverse.)

The other side shows the RCM’s logo (what the RCM calls a Mint mark, and what collectors have dubbed the “Circle M” mark) at the center, and the RCM name spelled out in English and French.

No specifications were available for this medalet, but it is presented in the spot a 5-cent coin might otherwise have appeared, suggesting they are similar in size. The medalets are struck on the same blanks the RCM has used to allow visitors to strike their own souvenir medalets on an older press.

Packaging for the set includes an image of a large and colorful maple leaf, as well as text reading “Commemorative Canadian coin and medal set” along with the same phrase in French.

The ANA show logo and “World’s Fair of Money 2011” on the packaging identify the issue as a show special.

Five hundred sets were issued at $15, but they sold out quickly. Collectors will have to search the secondary market to purchase one. ¦