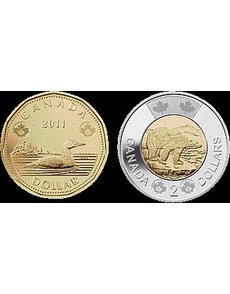 Though they carry denominations, a closer look at the reverses of the $1 and $2 test tokens reveals a few differences from the actual circulating coins, including T and E letters inside the laser mark maple leafs on both coins and the placement of the 2011 date on the $1 token above the loon, rather than below the bird as on the $1 coin, among other details. 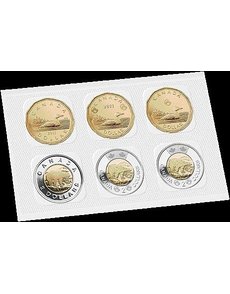 The Royal Canadian Mint has released a collector set including test tokens for the new lighter, more secure $1 and $2 coins that began entering circulation in April. The set features both 2011 and 2012 $1 and $2 coins, representing the legacy and next generation versions of those coins, with a test token for each.

Collectors of Canadian coins now have a chance to own test samples of the new $1 and $2 coins that debuted in April.

The Royal Canadian Mint’s transition to new versions of the coins, featuring a lighter-weight composition and additional security features, required a wide-scale cooperative effort with multiple agencies and organizations of the vending machine industry. The RCM produced an estimated 1 million tokens for each denomination for use in tests to ensure that the vending industry could handle the transition, which began April 10.

The RCM has offered test token sets to collectors, on occasion, when it has introduced changes.

The test tokens in the sets are like those “that were used by suppliers in various automated coin acceptance industries to calibrate and update their equipment,” according to the RCM.

The list of vendors who used the test tokens includes vending, parking, transit and retail businesses among others. The firms were sent the tokens so they could update and calibrate their equipment to read and accept the new coins. Following the calibration exercise, the tokens were sent back to the Mint.

The new $1 coin weighs 6.27 grams, compared to 7 grams for the previous version; the new $2 coin weighs 6.92 grams, compared to the 7.3-gram weight for the earlier versions. Despite more than two years of consulting with the vending constituencies, the new coins are the subject of many news articles in Canadian media about agencies and municipalities that had not yet transitioned their machinery (especially parking meters) to accept the new coins.

In addition to being slightly lighter, the next generation of coins incorporates new, visible security features and marks the debut of the RCM’s patented multi-ply plated steel technology.

The new $1 coin is composed of multi-ply brass plated steel. It retains the familiar 11-sided shape of its predecessor and features the Loon design by Robert-Ralph Carmichael, which debuted 25 years ago.

The ringed-bimetallic $2 coin is composed of a multi-ply brass-plated aluminum-bronze core within a multi-ply nickel-plated steel outer ring. It features Brent Townsend’s polar bear image, which has been featured on the circulation $2 coin in most years since the coin’s introduction in 1996.

The reverses of both coins feature a laser mark micro-engraving, and the $2 coin also contains a virtual image on the reverse and edge-lettering. The laser marks were produced during the striking of the coin using a contrasting pattern micro-engraved on the coin die itself.

The $1 coin bears a single laser mark of a maple leaf positioned just above the Loon design on the coin’s reverse side. The $2 coin features a set of two laser marks of maple leaves at the bottom of the outer ring.

In addition, the $2 coin sports a hologram-like virtual image of two maple leaves at the top of the outer ring. This virtual image changes as the coin is turned from side to side. The element was produced by engraving different patterns on each side of two-sided grooves on the face of the coin.

Edge lettering on the $2 coin reads CANADA and 2 DOLLARS.

The tokens are similar in many ways to the coins that they heralded, but the main difference is the indication of their test token status with the letters T and E (representing “test” in English and “Épreuve” in French) within the maple leaf laser marks.

Unlike the circulating version, the $1 coin features a pair of the leaf laser marks, rather than one laser mark, and the 2011 date on the reverse.

The edition of the set is limited to 25,000; the remaining test tokens have been recycled or archived at the RCM, according to officials.

The coin and token set is sealed inside a transparent plastic film and presented in a keepsake envelope. It retails for $29.95 and should begin shipping Sept. 4.

The price is listed in Canadian funds.