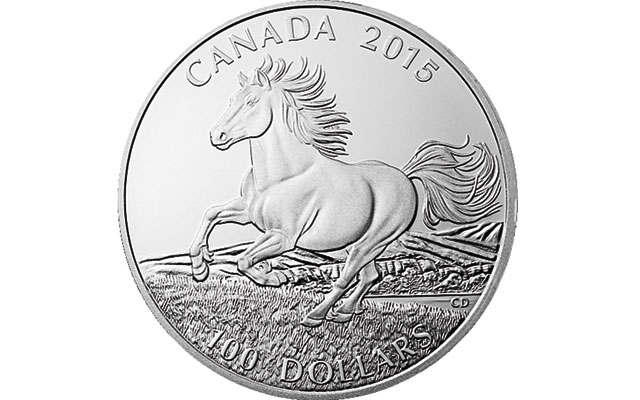 Canada’s newest silver $100 Wildlife in Motion coin, in a program being sold at face value, shows the Canadian Horse.

The Royal Canadian Mint on Feb. 10 released its fifth silver $100 coin in the Wildlife in Motion series.

Also dubbed the “$100-for-$100” program by collectors, for the purchase price of $100 that matches the coin’s face value, the new design, showing the Canadian horse, has a lower mintage than earlier issues.

The petit cheval de fer — the “little iron horse,” as it is known in its native Quebec — survived near extinction to emerge as one of Canada’s official national symbols, according to the RCM.

That limit is down from the 50,000 mintage limit established for the first four coins in the series. Those pieces honor the bison, grizzly bear, bald eagle and bighorn sheep, respectively. The 10 percent reduction in mintage could indicate flagging interest in the denomination as the RCM continues to expand the face value concept across several denominations. After launching $20 coins, the program's expansion includes $50, $100 and $200 coins at face value. The concept has spread abroad, notably to the Royal Mint, which has issued several silver £20 coins at face value.

The reverse design by Canadian artist Claudio D’Angelo centers on a Canadian horse in full gallop across a grassy meadow. Its wavy mane and tail, head and neck, and powerful musculature are rendered in detail. In the distant background, rolling farmland rises past a vast river.

The coin is available through the RCM to collectors in Canada and the United States at its face value, with a limit of three coins per household, and an additional shipping charge.

The price U.S. customers will pay through the RCM website will fluctuate based on exchange rate at the time of purchase.