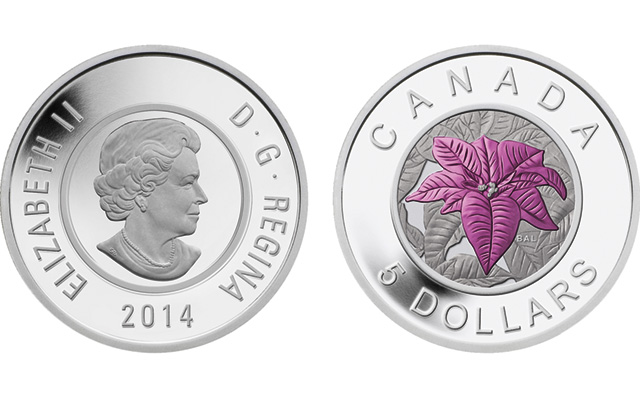 The final coin in the RCM's Flowers of Canada series celebrates a nonnative plant, the poinsettia. The colorful plant is featured on a Proof $5 ringed-bimetallic silver-niobium coin. The coin's .9999 fine silver ring surrounds a selectively oxidized niobium core.

Canada’s final coin in the Flowers of Canada series celebrates a native of Mexico.

The poinsettia appears on the third Proof silver $5 coin in the series. Poinsettia’s are so named for America’s first Minister to Mexico, Joel Robert Poinsett, who in the 1820s brought the plant to the United States, where it further migrated to popularity in Canada.

The 2014 coin features a reverse design by Canadian artist Bert Liverance, showing a poinsettia flower selectively colored so it stands out from a sea of blooms—a tribute to the star-shaped flower that beautifies holiday festivities across Canada every year.

The design is further enhanced by the coin’s oxidized niobium core.

Though red poinsettia’s are the most popular, the plant on the coin has a pinkish-purple hue.

The coin is being touted as an alternative gift instead of a flowering plant, since it will never lose its color or shed its leaves.

The coin weighs 9 grams, measures 28 millimeters in diameter and has a mintage limit of 6,000 pieces.