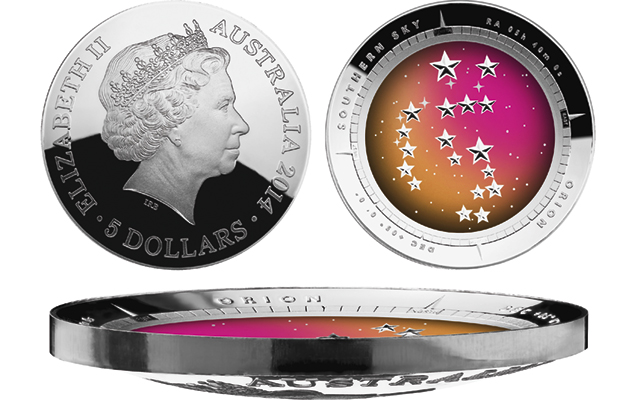 The Orion constellation features on the third and final coin from the Royal Australian Mint’s Southern Sky series. The Proof .999 fine silver $5 coin is dome-shaped and printed with color to highlight the constellation's place in the celestial sphere. 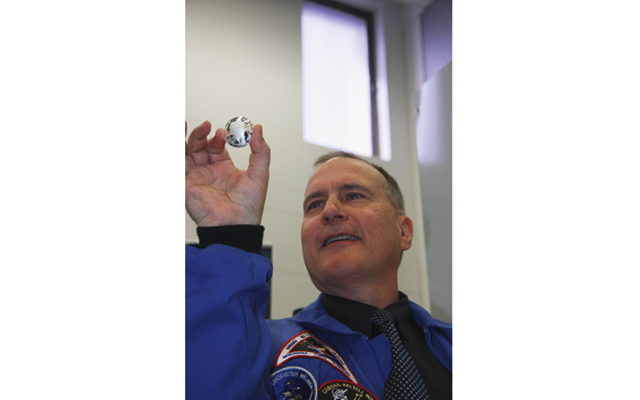 Former NASA astronaut Richard "Rick" Hieb inspects one of the coins he struck Aug. 18 during a ceremonial coin striking at the Royal Australian Mint. 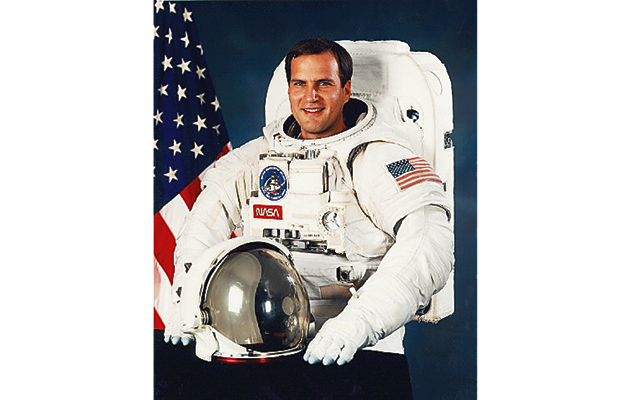 Richard "Rick" Hieb, as seen when he served as an astronaut with the National Aeronautics and Space Administration.

Astronauts may achieve their fame by going to outer space, but rarely do their activities on Terra firma make news.

On Aug. 18 the Royal Australian Mint hosted former American astronaut Richard “Rick” Hieb for a ceremonial coin striking, the first time an astronaut has visited the factory in Canberra, Australia.

Hieb struck three examples of the coin, all of which are being set aside for possible special future use.

Hieb, currently a vice president with Lockheed Martin’s Antarctic Support Operations, said via a press release: “I have accumulated some significant firsts throughout my career, but this is the first time I have ever been able to strike a coin myself. I am truly thankful to the Royal Australian Mint for being provided with that opportunity.”

Hieb’s career with the National Aeronautics and Space Administration includes three space flights (1991, 1992 and 1994), including being on the original flight of the space shuttle Endeavour. Hieb was also a member of the first three-person extra-vehicular activity (spacewalk).

In Greek mythology, Orion desired to impress, either through his hunting skills or his handsome charm. As a constellation on the celestial equator, Orion is visible around the world, holding his club and shield.

The Orion constellation is one of the most widely recognized star constellations visible in both hemispheres and includes some of the largest and brightest stars in the night sky.

The latest deep space exploration mission being advanced by NASA, also named Orion, is laying the groundwork to send people to Mars in the years after 2017.

The RAM is working with Lockheed Martin to see if one of the Orion coins may be included in the payload of an Orion capsule undertaking a deep space mission in the future. One of the other examples may be added to the Australian national coin collection, and "possibly the other may be made available to NASA for posterity," Marcus Butler, a communications officer at the Royal Australian Mint, said. "Of course, all this hinges on the outcome of our engagement on this."

Lockheed Martin purchased a standard example of the coin from the RAM inventory for presentation to Hieb, Butler said.

All three domed coins in the Southern Sky series are color printed to emulate their presence in the celestial sphere. Aside from the distinctive domed effect, the coins also feature the coordinates of the respective constellations in the night sky.

All three coins feature the Queen Elizabeth II effigy by Ian Rank-Broadley on the obverse, and Aaron Baggio is credited with the Orion coin's reverse design.