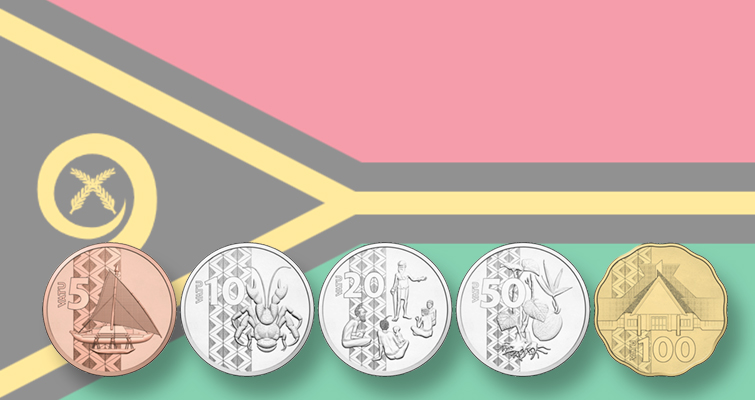 Vanuatu’s new 2015 vatu coins, shown above, are all smaller and lighter than earlier versions of the coins. 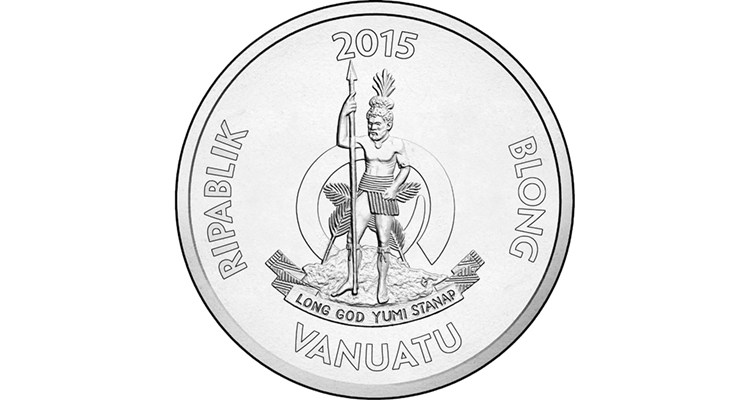 The common obverse of the 2015 Vanuatu coins maintains the national coat of arms design.

A second high-profile shakeup in South Pacific currency, as abetted this summer by the Royal Australian Mint, occurred in Vanuatu.

A new series of five circulating coins, smaller and lighter than the previous series, debuted in late July, the Royal Australian Mint announced Aug. 18. The coins range from the 5-vatu piece to a scallop-edged 100-vatu denomination. Coins of the previous series are round.

Vanuatu’s heavier, larger coins, which were in use for more than 30 years, were costing more to produce than their face value, according to the Reserve Bank of Vanuatu. The currency reform followed a public opinion survey in 2008, the bank said.

The obverse of all the Vatu coins maintains the national coat of arms, while each new reverse sports a new design.

The reverse of the 5-vatu coin shows a traditional outrigger canoe, symbolizing the role of the canoe in inter-island trading.

The reverse of the 10-vatu coin depicting the coconut crab highlights the need for conservation of this endangered wildlife that is also a delicacy.

Traditional governance is the theme of the reverse of the 20-vatu coin, which shows a gathering of traditional community leaders, or “jifs.”

The reverse of the 50-vatu coin shows kava leaves and coconut, two of Vanuatu’s exports.

The reverse of the highest denomination coin, the 100 vatu, shows the nation’s Parliament House, symbolizing modern governance and the rule of law.