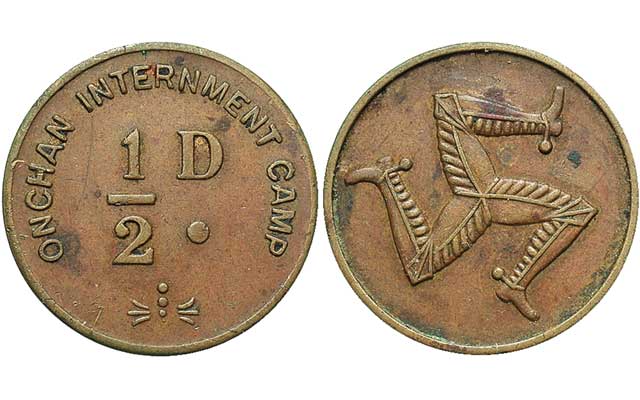 A brass halfpence token from Onchan Internment Camp on the Isle of Man recalls the treatment of Jews during World War II. 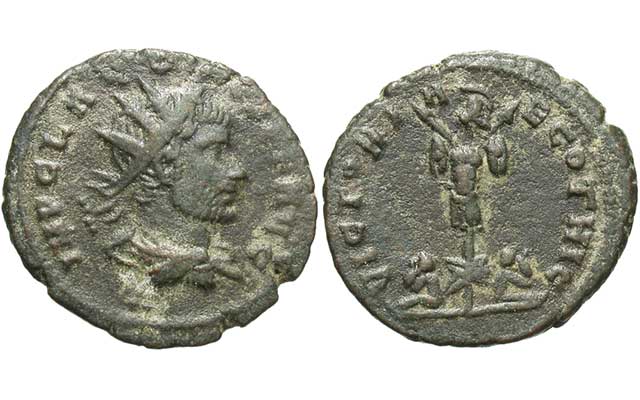 A bronze antoninianus of Roman ruler Claudius II marks his victory over the Goths which earned him the nickname “Gothicus.”

That there is a market for material that is connected to painful parts of history might come as a surprise to some people.

A token from an Isle of Man internment camp operated by the British during World War II is one such piece.

The token is among dozens of lots of Anti-Semitic and related items offered by William M. Rosenblum LLC Rare Coins in a coming auction.

Sale 45a closes July 16 at midnight Mountain Time. Rosenblum specializes in Judaica, and veers into related pieces recalling hatred and atrocities toward Jews throughout history.

“We are often asked, ‘why do people collect this stuff?’” Rosenblum writes in the catalog.

“There is really no one answer to that. Most people collect them to use as teaching tools in homes, schools, synagogues, churches and museums. There are people who still deny the existences or the magnitude of the Holocaust and these are weapons against them.”

The undated (1941) brass halfpenny token is from Onchan, a village on the Isle of Man, which is situated between Great Britain and Ireland.

The British interment camp at Onchan was the first and largest on the Isle of Man, and was created by evacuating residents and surrounding their houses with barbed wire, according to Silent Witnesses: Civilian Camp Money of World War II by Ray and Steve Feller. Internees were housed in the homes evacuated by their original residents.

The halfpence is the scarcest denomination of three tokens issued for use in the camp. It has a mintage of 2,000 pieces, according to the Fellers.

Operated by Britain, the camp was used to house mainly German internees, as they were the enemy during World War II.

“In reality most likely the majority were German Jews who were escaping persecution by the Nazis, Rosenblum said.

According to newspaper accounts cited by the Fellers, the internees wanted to help the war effort, even publishing a cartoon in the camp newspaper asking Sir Winston Churchill, “what’s our station?”

The token features the denomination and camp name on the obverse, with the triskelion, three-legged symbol of the Isle of Man, on the reverse.

The token is graded About Extremely Fine, according to Rosenblum, and has an estimate of $250+.

The firm also specializes in ancient coins, and an affordable Roman highlight recalls a historical moment for ruler Claudius II.

The circa 268 to 270 A.D. bronze antoninianus of Cyzicus was issued for Claudius II, who was also known as Gothicus. The coin commemorates Claudius’ victory over the Goths at Naissus in Moesia, the victory that gave him his name Gothicus.

A bust of the ruler appears on the obverse, with two captives seated at base of a trophy on the reverse.

The Very Fine coin is “a bit porous” and “a scarce and important coin,” the firm said.

To see all 419 lots, find the catalog at the firm’s website.