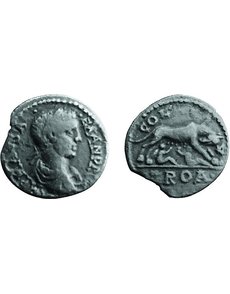 A coin submitted by a reader could be a Roman provincial bronze, struck during the reign of Emperor Severus Alexander. An ancient coin expert would need to see it in person to determine its authenticity and condition.

Can you help me identify this ancient coin?

David Vagi, who writes the “Ancients Today” column for Coin World Special Edition, and is the director of ancients at Numismatic Guaranty Corp., examined the coin images Ms. Henderson submitted.

Vagi said: “I can’t say if [the coin] is genuine based on the photos, but there is a very good chance. If so, it is a Roman provincial bronze of the Emperor Severus Alexander from the mint of Alexandria Troas in Troas (located not far from Troy in northwestern Turkey). The obverse shows the emperor’s portrait, the reverse shows the She-Wolf suckling Romulus and Remus [legendary founders of Rome].”

To determine the coin’s authenticity and condition, Ms. Henderson would need to have the coin examined by an expert in ancient coins, such as one employed by a reputable third-party grading service.

For U.S. Army personnel and enthusiasts of that branch of the armed forces, 2011 is their year to shine.

These coins were authorized by Congress under the United States Army Commemorative Coin Act of 2008, signed into law by President George W. Bush on Dec. 1, 2008.

The U.S. Marine Corps was honored with a commemorative silver dollar in 2005. The coin proved so popular that then-Treasury Secretary John W. Snow authorized an additional 100,000 coins to be struck in addition to the 500,000 maximum called for in the enabling legislation.

The Mint currently sells a 3-inch diameter bronze medal, struck in honor of the 200th anniversary of the U.S. Navy in 1975. Otherwise, collectors can acquire privately produced items of a naval nature, such as silver rounds.