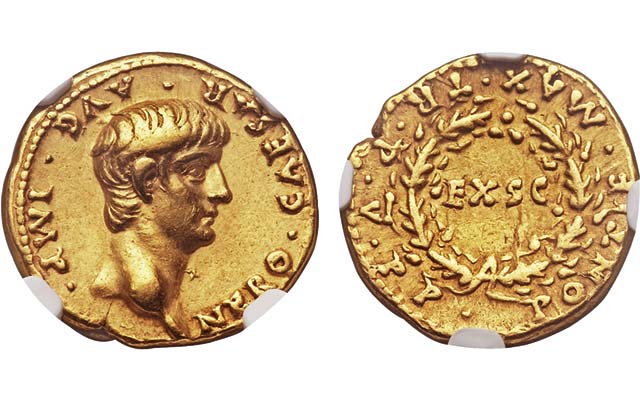 A handsome gold aureus of Nero graded Extremely Fine and certified by NGC as having fine style sold for $8,515.75 at Heritage’s 2015 CICF sale.

Roman gold coins of the 12 Caesars are immensely popular, as are all coins of Nero. This is due in large part to this famed Roman Emperor’s unsavory reputation, but also because the portraits of him on coins are especially expressive and diverse. This gold aureus dates from A.D. 58 to 59, and has a youthful portrait showing Nero in the early years of his reign, which took place between A.D. 54 and 68.

The portrait here shows Nero in relatively slim form, in contrast to the fuller form that the emperor’s portrait would take in later issues. This issue marks a transition between two aspects of Nero’s personality. As Heritage notes: “Nero’s name has become synonymous with decadent, depraved tyranny. It is surprising, then, that the first five years of his reign were looked upon as a golden age of wise, moderate government.”

This example, graded by Numismatic Guaranty Corp. as Extremely Fine, with specifics articulated per NGC’s grading system for ancients that rates a coin’s strike, surface and style. Here, the strike is rated as 5/5, the surface at 3/5 and the style as fine.