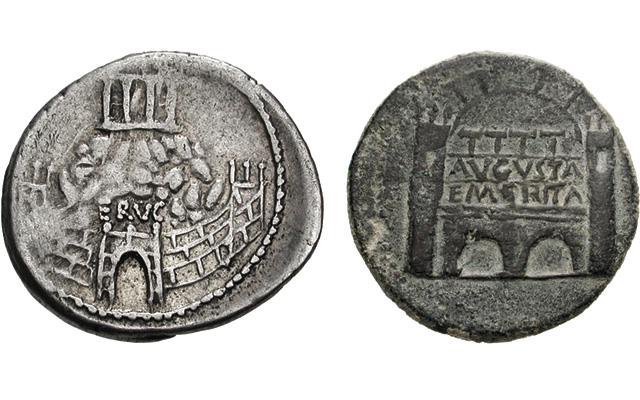 A wall appears beneath a mountaintop temple of Venus on a silver denarius, above, of circa 57 to 56 B.C.; the city walls of Emerita, Spain, appear on a bronze coin, right, issued by Tiberius (A.D. 14 to 37). 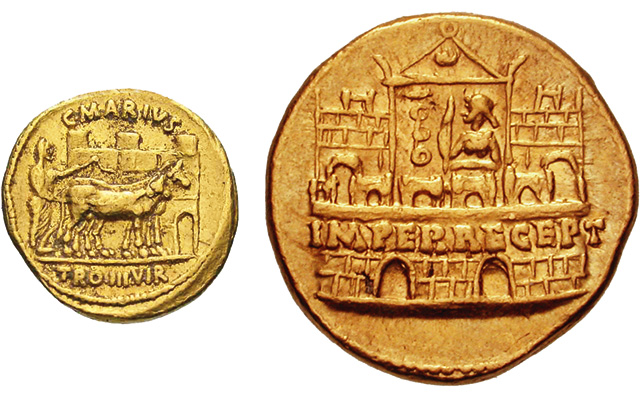 These two gold aurei show defensive walls: one of Augustus, struck in about 13 B.C., left, incorporates a plowing scene; one of Claudius, right, depicts the Praetorian Guard camp. 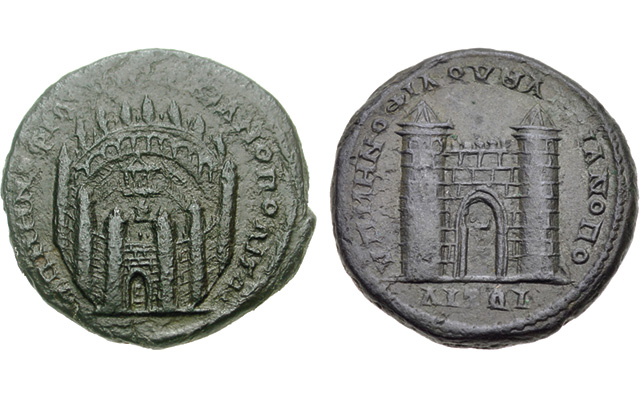 A bird’s eye view of city walls, left, and a city gate, right, appear on provincial bronzes of Gordian III (A.D. 238 to 244) struck at Marcianopolis in Moesia. 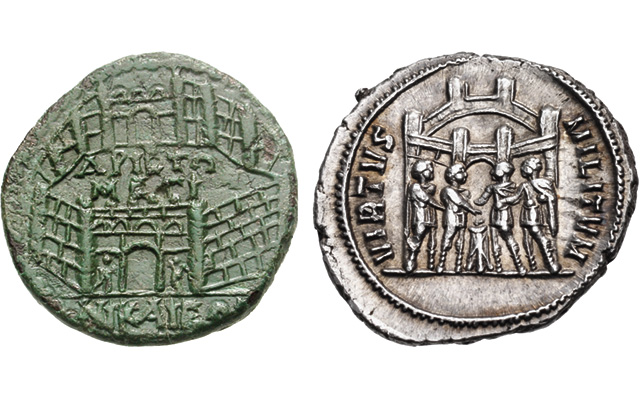 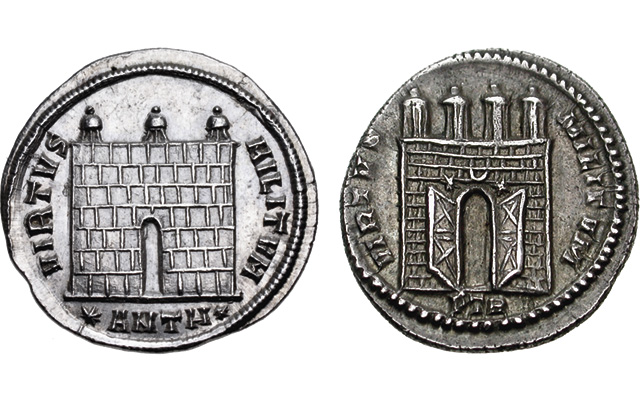 Fortifications have been a fact of life since the majority of humans transitioned from a nomadic, hunter-gatherer lifestyle to a settled existence in which food was raised and harvested rather than gathered in transit. This great leap caused the foundation of permanent settlements, which then had to be protected, often with perimeter walls.

With the passage of time, defensive walls became increasingly larger and stronger to counter the increasing sophistication of siege weaponry. The use of fortified walls peaked in the 12th century A.D., with their effectiveness soon being reduced by the destructive power of gunpowder cannons.

Long before gunpowder, though, the Romans had put walled fortifications to great use, building extraordinary fortresses that gave them an advantage against their less enterprising enemies. During the second and third centuries A.D. fortress use was greatly expanded, to combat barbarian invasions across the Rhine and Danube rivers on the continent, and along the “Saxon Shore” across the English Channel.

These fortifications made quite an impression on the selection of coin designs from the third century onward.

Though these coins are useful to scholars for the insight they provide into Roman fort and defensive wall design, they are perhaps even more valuable as a commentary on the frame of mind of the Romans who issued them in an era when border defense was a daily concern.

An early example of fortified walls on Roman coinage is an issue of silver denarii struck in about 57 or 56 B.C. by the Roman moneyer C. Considius Nonianus. The design shows a temple dedicated to Venus on the summit of a rocky mountain in Eryx, Sicily. The temple’s base is surrounded by a wall with a gate and two towers. We may presume the wall did not surround the entire mountain, and it thus is a representation of a wall that enclosed the city or the temple complex.

One way the Romans showed city walls and fortresses was from a bird’s eye view, in which the front of the wall is shown, as well as its full circuit. Perhaps the most famous use of this design technique on Roman coins was the portrayal of a civilian structure, the Colosseum in Rome, as shown on brass sestertii of the Emperor Titus (A.D. 79 to 81), gold aurei of Severus Alexander (A.D. 222 to 235), and base metal medallions of Gordian III (A.D. 238 to 244).

This technique was also used on coins issued at the city of Emerita in Spain. Silver denarii struck there by Rome’s first emperor, Augustus (27 B.C. to A.D. 14), show the full length of a turreted city wall with a double-arch at the front; enclosed within is the city name inscribed EMERITA. That same image was used on copper coins struck there for local use by Augustus and his successor Tiberius (A.D. 14 to 37).

A particularly fine city wall with turrets and a gate appears on a gold aureus struck for the emperor Augustus in about 13 B.C. by the moneyer C. Marius C.F. Tromentina. This city wall is symbolic rather than specific, for it shows the emperor (or a priest?) with a yoke of oxen plowing a field in the foreground. This celebrates the bringing of Roman civilization to “barbarian” lands freshly annexed in the Alpine provinces of Raetia and Noricum.

A classic depiction of defensive walls appears on gold aurei and silver denarii issued upon the accession of the emperor Claudius (A.D. 41 to 54). This wall enclosed the infamous camp of the Praetorian Guards in Rome. It is shown because the selection of Claudius as emperor was forced upon the senate by the Praetorians, who safeguarded him within their barracks until the Senate confirmed his appointment.

The bird’s eye view used on the issues of Emerita was seldom repeated in later centuries. A fine representation of a defensive circuit wall, however, appears on provincial coins issued at Marcianopolis in Moesia, a city not far from the Black Sea coast and the Danube River. On a copper pentassarion of Gordian III the wall has 13 fictitiously tall towers and a gate. It harbors many interesting features within, including an arched colonnade and a temple precinct.

A similar engraving effort was made a generation later at the city of Nicaea in Bithynia, in the northeastern corner of Asia Minor. Here the artist was less successful, as the walls are crudely formed. However, it features two gates to the city — one at the front, and one opposite. Instead of containing structures, it encloses an inscription that describes Nicaea as the best and most beautiful of cities.

A far more consistent portrayal of city walls and “camp gates” began under the Emperor Diocletian (A.D. 284 to 305). Indeed, from about 294 to 329, city or camp gates became a standard reverse type for Roman silver and base metal coins, and even appeared on some gold issues.

In about A.D. 293 or 294 Diocletian introduced a dime-sized silver coin now usually called an argenteus. It had a variety of reverse types, but the two most common depict city or camp gates (the debate still rages about which it is).

One shows the four men who co-operatively ruled the empire under Diocletian’s oversight conducting a sacrifice before a circuit wall as seen from a bird’s eye view. Just as with Augustus’ aureus with the plowing scene, the type is symbolic: it shows the unity of the four rulers, their devotion to the gods, and the defensive security that resulted from their efforts.

Equally abundant is the other main representation on argentei, which shows the fortified gate of a city or an army camp.

A tremendous variety is found in the presentation of the classic “camp gate” coins, including in the number of layers of brickwork, how they are represented, and whether the gateway is open or has closed doors. Furthermore, uncertain protrusions on the top of the wall are variously described as turrets or light beacons.

The “camp gate” type was also introduced on billon coins of the period, but was not used extensively on these low-value coins until the era of Constantine I “the Great” (A.D. 307 to 337). They also occur on bronze coins issued from 364 to 408, and on an issue of small bronzes from later in the fifth century, though they are more crudely engraved.