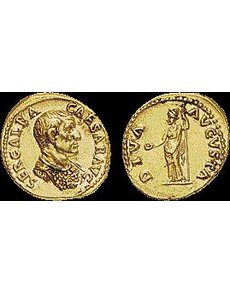 A circa 68 to 69 gold aureus of Roman emperor Galba in Extremely Fine condition led all lots in the New York Sale’s Jan. 5 auction, realizing $432,900 (including 17 percent buyer’s fee).

The coin, which had an estimate of $60,000, was featured in the New York Sale’s auction XXVIII, one of three conducted during the New York International Numismatic Convention by the same group of dealers and auction houses. This auction, which offered ancient Greek, Roman, Byzantine and world coins, realized $1,088,036 including the buyer’s fee.