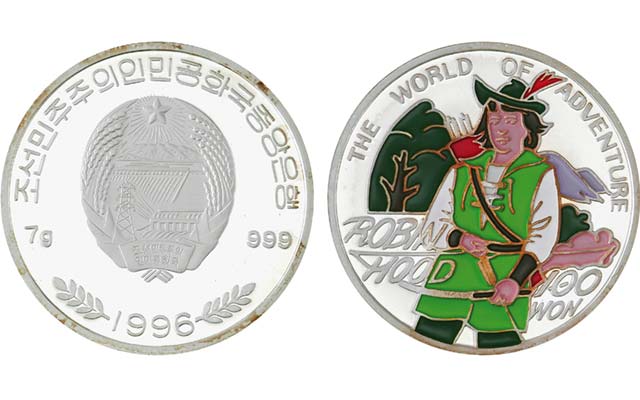 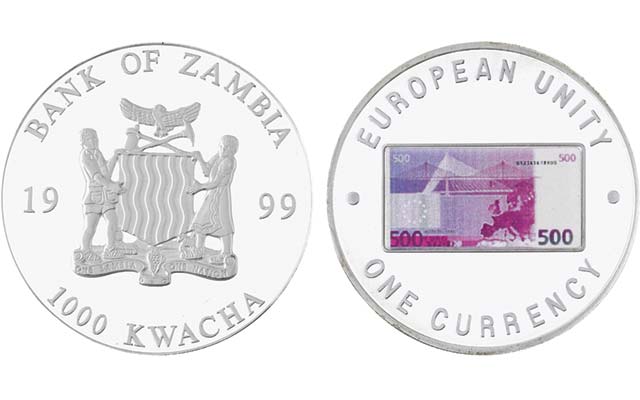 This 1999 Zambian 1000-kwacha coin from Africa commemorates another continent’s money with a mint-colorized €500 bank note design and the legend EUROPEAN UNITY, ONE CURRENCY. 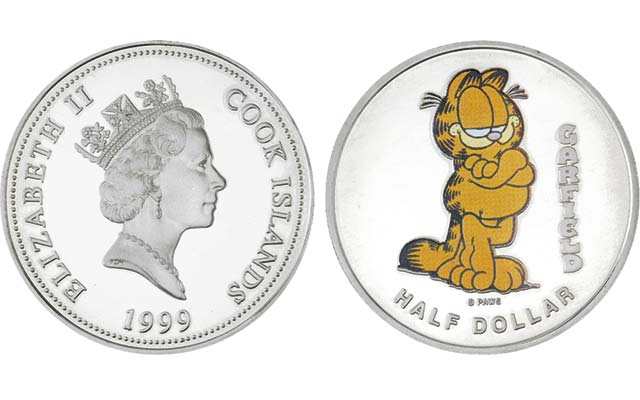 A mint-colorized Garfield the Cat cartoon character on a 1999 Cook Islands half dollar panders to several different categories of collectors. 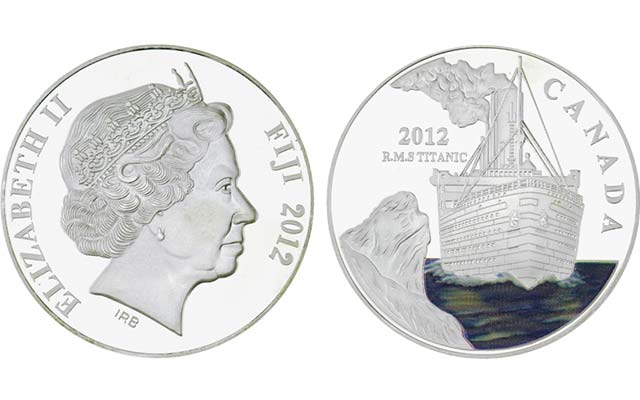 Fiji’s silver-plated mint-colorized 2012 medal is almost identical on both sides to a Canadian 50-cent coin. Both commemorate the 100th anniversary of the Titanic tragedy in 2012. 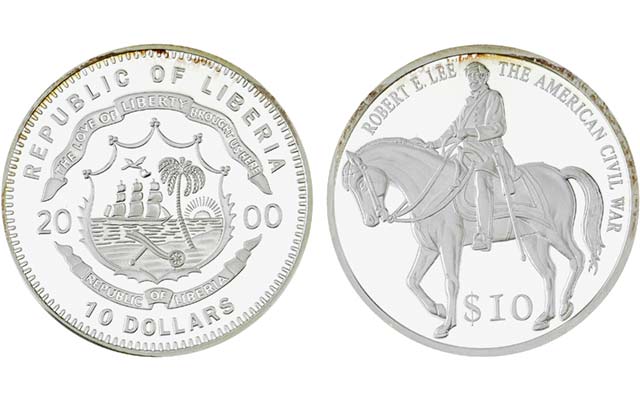 Confederate Gen. Robert E. Lee owned slaves and fought for the survival of slavery on the side of the Confederacy. Liberia is an African nation founded by former American slaves, yet it placed Lee on one of its $10 commemoratives in 2000. 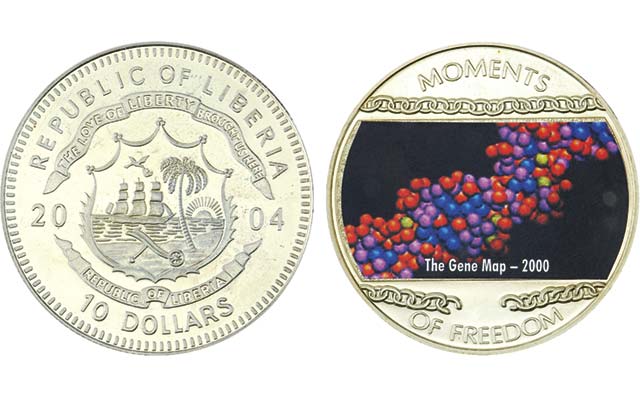 It should be simple to see the connection between a coin’s imagery and its series theme, but such is not the case with this 2004 Liberian $10 coin. Titled “The Gene Map 2000,” it is part of the 24-coin series “Moments of Freedom.” 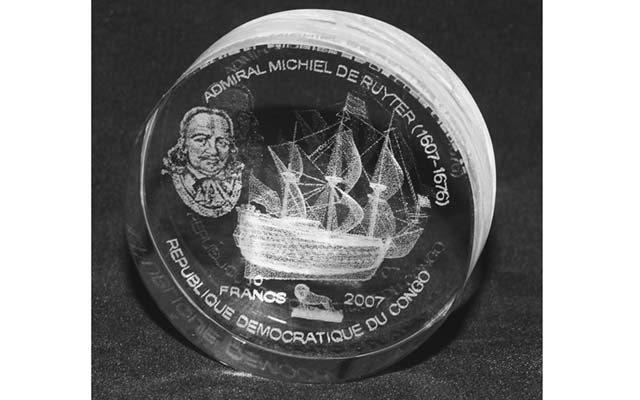 This 20-millimeter-thick acrylic 2007 10-franc coin does not fit any standard storage system. It honors a Dutch admiral although nothing historically links Congo and Adm. de Ruyter. 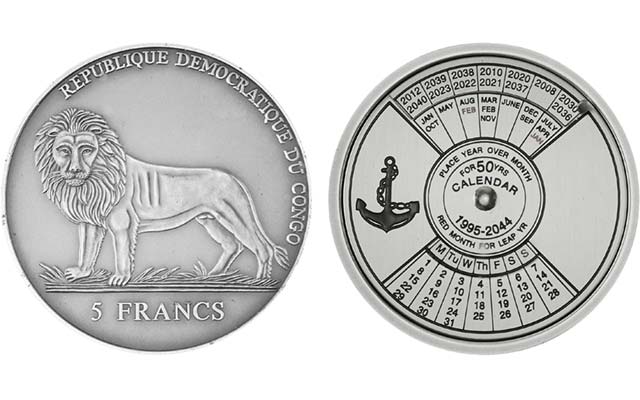 The unwritten law of bizarre coinage says that the risk correlates to the length or complexity of the coin development process.

That is, the easier it is for a nation to issue a new coin, the more likely it is that the end result will cause collectors worldwide to scratch their heads and say, “Huh?”

A perfect example is a 100-won coin issued in 1996 from North Korea featuring a mint-colorized Robin Hood on the reverse. It is part of the World of Adventure series that also featured Robinson Crusoe (another Brit). “World of Adventure” is a great title for a coin series, but the series lacks Korean adventures, and ironically, the people of North Korea are not even permitted to travel the world.

Pandering and profit are two of the most common reasons for the existence of outlandish world coin designs. Issuers attempt to pander to various types of world collectors or net a quick profit from noncollectors by using a popular topic.

If you are going to pander, you could do worse than aiming your efforts at Europe. The 1999 1,000-kwacha coin from Zambia has nothing to do with Africa. The reverse features a mint-colorized replica of a €500 bank note along with the legend EUROPEAN UNITY, ONE CURRENCY. The sad irony here is that of a battered currency celebrating a stable one. The kwacha has been ravaged by inflation. On June 2, the exchange rate reached 7,190 kwacha to the U.S. dollar and 8,058 kwacha to the euro.

Cook Islands coin issuers have mastered the art of pandering, issuing a high number of coins that have nothing to do with its culture or history. One example is the 1999 half dollar with the mint-colorized likeness of Garfield. This design of a cartoon cat created by Indiana native Jim Davis panders to people who like or collect mint-colorized coins, cartoon-related items, felines, and humorous icons.

The tragic story of the Titanic in the North Atlantic is internationally known. Fiji took advantage of that fact for the 100th anniversary of the ocean liner’s demise in 2012. Its silver-plated mint-colored Titanic medal is an almost perfect duplicate of a 2012 Canadian 50-cent coin. The only readily apparent differences are the lack of a denomination on the reverse side of the medal, the presence of a slightly different portrait of Queen Elizabeth II on the obverse, and the word FIJI replacing D.G. REGINA. This unexplained imitation has caused confusion. Some collectors bought the medal thinking it was the Canadian coin.

The West African nation of Liberia has authorized enough weird coin designs to fill a book, but in this column, we’ve only room for two examples. The first, a mint-colorized $10 coin from 2004, is part of the 24-coin series “Moments of Freedom.”

It requires research to find the link between a moment of freedom and “The Gene Map 2000.” The idea was that the gene map will find the genetic roots of disease, help develop new treatments, and eventually, bring freedom from disease. Others in the series requiring a bit of effort to understand include William Tell and Galileo.

My vote for Liberia’s most bizarre coin goes to the 2000 silver $10 commemorative coin with Confederate Gen. Robert E. Lee astride his horse. This is the singular element on the reverse. Lee is not featured with Gen. Grant, or with President Lincoln, although there are other coins from Liberia with those combinations. Liberia is an African nation founded by former American slaves. Did someone forget that Lee owned slaves and fought for the survival of slavery on the side of the Confederacy?

The next example is not only puzzling, it looks like a puzzle. In fact, it is a rotating 5-franc calendar piece issued by Congo. The very thing it is designed to be clear about, the date, is also what makes it confusing. This coin has no date of mintage on it. It was issued in 2004 with a calendar that can determine dates between 1995 and 2044, thus the 50-year calendar would be useful for only 40 years from its time of issue.

The second Congolese coin is a 10-franc piece from 2007 made of plastic. A coin made entirely of clear acrylic is not necessarily a bad idea. But this one is 50 millimeters in diameter and 20 millimeters thick, so it does not fit any standard storage system. It doesn’t come with a custom capsule either.

But it is the subject that makes it truly odd. You won't find an African theme here.

This coin honors a Dutch admiral, Michiel de Ruyter (1607 to 1676). Nothing in history, previous to this coin, links Congo to Adm. de Ruyter or his native land.