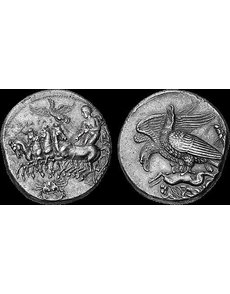 A silver decadrachm from Akragas, Sicily, one of 12 known examples, will appear at auction Jan. 4 in a sale conducted jointly by Classical Numismatic Group and Nomos AG.

The coin has an opening bid of $2.5 million.

Silver decadrachms of ancient Greece are among the most coveted and rare of ancient coins, with the example coming up at auction in January considered especially notable. The circa 409 to 406 B.C. silver decadrachm from Akragas is “one of the most artistically exciting of all ancient Greek coins,” according to CNG.

“A masterpiece of late 5th century engraving,” the coin is also expected to be the most expensive coin of ancient Greece ever sold, according to CNG.

The auction, of “Masterpieces of Ancient Greek Coinage: Selections from Cabinet W,” will be held during the New York International Numismatic Convention.

The coin weighs 43.31 grams and measures 35.5 millimeters in diameter (slightly smaller than a Morgan silver dollar but heavier). It is among a class of commemorative issues struck in the late fifth century B.C. by several of the wealthy cities of Sicily.

A left-galloping chariot appears on the obverse, soaring upward in the sky and driven by a youthful male recorded as Helios in the chariot of the sun, while the reverse shows “the classic badge of the city,” two eagles perched on a dead hare in triumph.

Decadrachms are unusually large in size and face value compared to all the other coins minted in Sicily, and the best artists were employed to engrave the dies used to strike these coins. The designs for this Akragas issue are attributed to the engravers Myron (the side with the chariot) and Polykrates (the side with the eagles).

The examples from Akragas were reportedly struck to celebrate a single event: the victory of Exainetos, a citizen from Akragas who won the chariot race at Olympia in 412 B.C.

While some decadrachms circulated, most, including the issues of Akragas, were commemorative in nature. The first silver decadrachm emerged in Syracuse in the 460s; the coins apparently circulated in Syracuse for a long period of time, according to the catalog.

In Good Extremely Fine condition, the coin in the Jan. 4 auction is only the third example offered at auction in some 31 years.

A “dreadful example” was offered by CNG in a 1998 Triton auction. A piece in better condition was part of the famous Nelson Bunker Hunt Collection sold in 1990. The Hunt example realized what was then a record price for a Greek coin, $572,000, and the Hunt example “is no match for the quality of the present piece,” according to CNG.

Of the 12 examples known, six are in museums. The other six include the offered piece, the Hunt and Triton coins, two other examples privately held in the United States, and one “apparently in Switzerland.”

The example being offered has been in unnamed collections in the United States and Switzerland after being part of an English collection in London in the 1960s.

The coins are rare today because their issue was likely limited, based on die evidence that points to the coins being struck using only two obverse and three reverse dies. The coins would have been issued for only a short period of time before the Carthaginians captured and destroyed Akragas in 406.

The record-holder for any ancient Greek coin is the $902,766 realized in a 2008 auction for a circa 407/6 B.C. gold stater of Athens, one of only four known staters of the emergency issue at the end of the Peloponnesian War. ¦