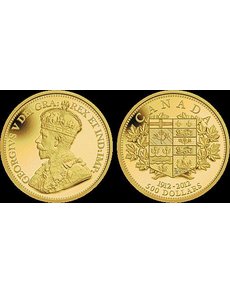 Canada issued its first national gold coinage in 1912, a few years after the Ottawa Mint, then a branch of the Royal Mint, was opened. A 5-ounce, .9999 fine gold $500 coin marks the centennial. 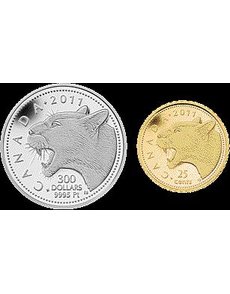 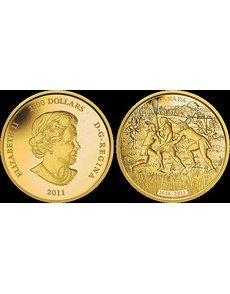 A new kilogram gold coin, denominated $2,500, marks the 375th anniversary of what is believed to have been the first European documentation of the sport lacrosse. 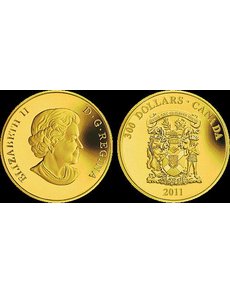 The eighth in a biannual series of Proof gold $300 coins depicting the coats of arms from Canada’s provinces and territories honors Nova Scotia, the earliest of that nation’s provinces.

Gold and platinum are featured in recent collector coin issues from the Royal Canadian Mint.

Within recent weeks, the RCM has released one platinum coin and four gold coins, honoring a range of topics.

The smallest gold coin of the group, denominated 25 cents, features a design also used for the platinum coin. Both of these coins were released Oct. 11.

Emily Damstra’s design of a fearsome cougar baring its teeth appears on the reverse of the smallest pure gold coin struck by the RCM. The Cougar coin is the second in an annual series.

The cougar is an elusive predator that once ranged from Canada’s east to west coasts before being hunted and displaced to near extinction. It was officially listed as endangered in 1978. Although the cougar’s stealthy nature has always made tracking its population difficult, repeated sightings suggest that it is making a comeback, even as far as eastern Canada, according to the RCM.

The Susanna Blunt effigy of Queen Elizabeth II appears on the obverse of each coin mentioned here.

The 2011 coin features the coat of arms of Nova Scotia, the oldest of any province or territory in Canada, which was granted in 1625. The Nova Scotia coin is the eighth issue in the series.

Nova Scotia, whose name implies a strong connection to Scotland, was the first North American colony to receive its coat of arms from the British monarchy. A shield adorned by the cross of St. Andrew, the royal lion at the centre of the shield and a crowned unicorn are three distinct elements transferred from the Royal Arms of Scotland, paying tribute to one of Canada’s most important founding cultures. The Nova Scotia Coat of Arms also honors the First Nations inhabitants of the province, with a trident-bearing aboriginal man in full headdress.

In 2012, Canada will commemorate the centennial of the first Canadian gold coins. On Oct. 1, the RCM released a 5-ounce .9999 fine gold $500 coin to mark the occasion.

The centennial commemorative is the sixth 5-ounce pure gold coin from the RCM since 2007. In 2012, the RCM will use “this imposing gold coin format to mark a special numismatic moment,” the 100th anniversary of Canada’s first gold coins.

After opening a full-time gold refinery in 1911, the Canadian branch of Britain’s Royal Mint was ready to convert Canada‘s vast gold resources into distinctly Canadian coins in $5 and $10 denominations. The 1911 gold coins were the first gold coins to bear canada as part of the inscriptions, beneath which was engraved the shield of the Canadian coat of arms, consisting of the arms of the four founding provinces of the Dominion in 1867: Nova Scotia, New Brunswick, Quebec and Ontario.

The series was short-lived, however, as the advent of World War I in 1914 prompted the Canadian government to conserve its gold and withdraw the gold $5 and $10 coins from circulation.

The modern iteration, with a reverse design derived from the original $5 and $10 coins, was produced using an authentic 1912 example provided by the Bank of Canada for design purposes only, according to Alex Reeves, senior manager of communications at the RCM. The centennial issue, besides bearing the $500 denomination on the reverse, also includes the dual dates of 1912-2012.

Another large gold coin recently released celebrates a native sport and is a companion to a silver issue released in July this year.

Released Nov. 1 is the kilogram .9999 fine gold $2,500 coin marking the 375th anniversary of the first European observation of lacrosse.

French Jesuit missionary Jean de Brébeuf in 1636 is credited with being the first European to view a game of lacrosse, the stick-and-ball game that continues to be popular in Canada and some parts of the United States. The coin marks “One of the first European documentations of this powerful sport,” according to the RCM.