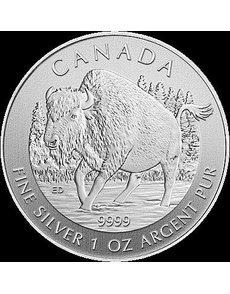 The RCM announced the sixth and final design for the three-year program celebrating the nation’s animals on Feb. 1 during the media forum at the World Money Fair in Berlin.

The coin has a maximum mintage of 1 million pieces (the same as the five earlier designs). It will be available only through the RCM’s network of bullion distributors and is not available directly from the RCM.

Distributors could begin ordering the coin on Feb. 18, with deliveries to commence that week. The coins are sold at a slight premium over the standard silver Maple Leaf pricing, but the pricing for the Wildlife coins is very much bullion related.

The final coin in the Wildlife series features Emily Damstra’s design of a left-facing bison galloping in snow at the edge of a forest. Specifications and metal purity references, as well as the nation’s name, fill the rest of the reverse.

The obverse depicts the Susanna Blunt effigy of Queen Elizabeth II, with denomination and year date.

The Canadian Wildlife coins are produced at the Ottawa Mint to the same specifications as the Maple Leaf 1-ounce silver coins, weighing 31.1 grams and measuring 38 millimeters in diameter.

The RCM does not intend for the Wildlife series to compete with sales of the traditional Maple Leaf program.

Previous coins in the program honor (in order of release) the wolf, grizzly bear, cougar, moose and pronghorn antelope. The first two coins are dated 2011, the second two, 2012, and the final two coins in the series (including the Wood Bison design) are dated 2013.

The wood bison is a subspecies of the American bison, and like the more widely known species, by the early 20th century was nearly hunted to extinction. According to the RCM, Canada is the only country in the world where wood bison live in the wild.

Two coins have been released each year, one coin unveiled annually at the ANA World’s Fair of Money, usually conducted in August, and one unveiled at the World Money Fair in Berlin, conducted in late January or early February.

RCM officials would not answer questions about whether a different series would take the place of the Canadian Wildlife series, which has been almost a footnote to the overall silver Maple Leaf program the past few years.

The Canadian Wildlife coins have retained strong premiums since their release, with earlier releases generally worth more than later coins in the program. ¦