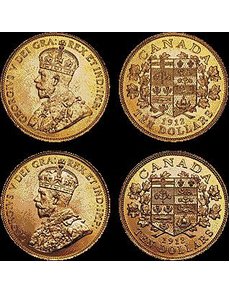 The Royal Canadian Mint is offering century-old gold coins that have been stored at the Bank of Canada. The 1912, 1913 and 1914 gold $5 and $10 coins are sorted into two groups, one designated Premium Hand-Selected, represented in the pair of images to the left above, and the other classified as Hand-Selected. Two 1912 gold $10 coins, one from each category, appear here. Coins that did not meet standards for the two marketing categories will be melted. 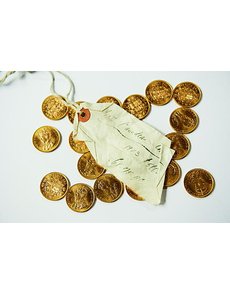 The sale of Canada’s early gold coins features examples that have been sitting in bank vaults, in many cases since the coins were struck and by all accounts since sometime shortly after the outbreak of World War I. A tag accompanies these coins.

The newest fast-selling product from the Royal Canadian Mint is 100 years old.

The RCM, in a joint announcement Nov. 28 with the Bank of Canada, announced that it would immediately begin offering 1912, 1913 and 1914 Canadian $5 and $10 coins that the Bank of Canada vaults have held since the bank opened in 1935. Before that the coins were held by the nation’s Ministry of Finance, which retains ownership of the coins today.

Several of the coins sold out after less than 48 hours on sale.

The short-lived experiment with a domestic gold currency ended abruptly at the outbreak of World War I in 1914. The Government of Canada recovered the majority of circulating $5 and $10 coins and withheld remaining stocks from circulation to help finance the war effort.

In a tale reminiscent of the General Services Administration’s sale of silver U.S. dollars from Treasury Department vaults in the 1970s, in total 30,000 coins were selected from Canadian bank vaults for sale to collectors. Funds raised from the sale of these coins, minus a fixed, undisclosed, management fee, will be converted into “high credit quality, marketable fixed income securities,” the RCM states.

The remaining coins — those “bearing imperfections from handling or environmental conditions” — will be melted and refined into pure gold by the RCM, converting them into a tradable, liquid asset.

“We are delighted that these pieces of our history are back in the spotlight after a nearly century-long absence,” said Ian E. Bennett, president and CEO of the Royal Canadian Mint.

The obverses of the coins carry a design by Sir Bertram Makennal featuring the effigy of King George V. The reverses, by W.H.J.

Blackmore, feature the inscription CANADA above a shield bearing the arms of the Dominion of Canada in a wreath of maple leaves, beneath which appear their year of issue and face value.

RCM personnel separated the coins to be offered for sale into two classes of quality, designated “Premium Hand-Selected” and “Hand-Selected.”

A disclaimer from the RCM notes that “the categories do not imply any form of coin grade, or suggestion thereof, derived from current numismatic grading standards.”

Premium Hand-Selected coins are targeted at “collectors with the highest standards” and thus “feature maximum eye-appeal and nearly pristine quality. Their lustre is exceptional, as is the quality of their strike and their virtually unblemished surfaces.”

Hand-Selected coins exhibit “a high quality appearance, with minimal evidence of wear caused by handling, storage, or environmental conditions,” and are more affordable so more collectors can obtain the historic coins, according to the RCM.

Alex Reeves, RCM senior manager of communications, addressed the conditions of the coins: “The bottom line is that we don’t grade coins. However we did work with a professional grader to sort the coins in terms of esthetic quality. Our goal was to offer up the ‘cream of the crop’ if you will, without getting into anything that suggests a grade.”

That led to the creation of the two category designations.

“The rest of the coins destined for melting have too many bag marks or wear to be sold as a high quality product,” Reeves said.

The RCM also had an eye to the numismatic marketplace when determining what and how many coins to sell, Reeves said.

“Our goal is not to flood the marketplace with too many coins,” he said.

The coins are expected to ship in January.

The melting of the remaining coins has not begun and no date for that step has been chosen yet.

In total, 140 six-coin sets were created from the coins being offered to the public, with the coins in the sets representing the finest in the entire collection. All of those coins are “Premium Hand-Selected.” The set is the only way to obtain the 1912 gold $10 coin designated in that condition.

Set packaging includes a Canadian maple wood box and one of the canvas bags that held the coins in the Bank of Canada vaults. The sets retail for $12,000 Canadian, and the public is limited to the purchase of one set.

In total, 291 gold $5 coins designated Premium Hand-Selected were offered to the public, for $875 each, and those sold out quickly.

The individual coins are secured inside a capsule with a silver holographic seal and then packaged in a black RCM clamshell case.

Sales of the Hand-Selected coins are limited to three per household, regardless of date.

Purchasers are limited to a single Premium Hand-Selected coin of any date or one six-coin set.

RCM distributors also expected to acquire some of the coins, but in some cases only limited quantities, and could not provide availability or pricing until the coins are delivered in January.

By far the most abundant coins in the sale of individual coins are the 1913 and 1914 $10 coins, which together total 22,763 coins, accounting for 75.8 percent of the reserves being offered.

The rarest coin being offered individually is the 1914 gold $5 coin. ¦