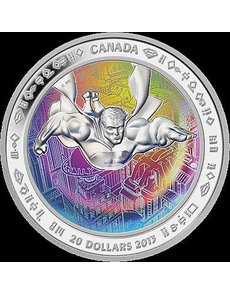 The Royal Canadian Mint is debuting new technology on a Proof .9999 fine silver $20 coin in the Superman program. The Metropolis design is the world’s first coin to use an achromatic hologram, which makes the superhero appear as if he were flying off the coin’s surface, according to the RCM. 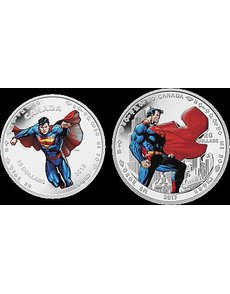 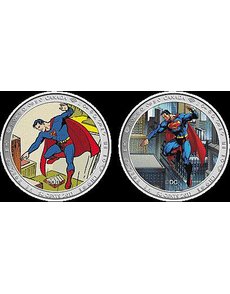 A 50-cent coin in a coin-and-stamp set features lenticular technology, so collectors can see both an early image of the superhero and a modern-day rendering. Sales of the set will determine the coin’s mintage. 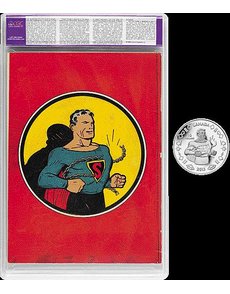 An early depiction of Superman might not be immediately recognizable to casual fans. A Proof Vintage .9999 fine silver $10 coin shows the early crime-fighter image, which graced the back cover of the Superman No. 1 comic (seen here inside a certification slab.) 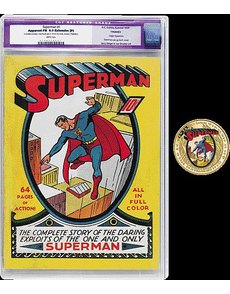 Superman made his debut as a stand-alone character in 1939, and examples of Superman No. 1 are valuable. A Proof .583 fine gold $75 coin borrows an image from that first issue.

The Man of Steel is now honored in copper-nickel, silver and gold.

The RCM’s program offers multiple views of the famed superhero who masquerades as a newspaper reporter. The coins were unveiled at Yonge-Dundas Square in Toronto.

In what has to be a first, all seven coins feature Superman’s native Kryptonian language. Six of the coins offer the inscription “75 Years Of Superman” in Kryptonian, appearing twice. The other coin, a Proof silver $10 piece, features a Kryptonian translation of “Superman,” appearing twice.

An oversized copper-nickel 50-cent coin is available as part of the Then and Now coin and stamp set.

The 50-cent coin pairs the iconic cover art of Superman No. 1 comic book with a modern interpretation of the same pose by Superman artist and DC Entertainment’s co-publisher Jim Lee. The two renditions shift using lenticular image technology as the coin is viewed, switching back and forth between the two versions.

The coin is accompanied by a Canada Post stamp also featuring Superman No. 1.

The coin and stamp set is being sold to order, for $29.75 Canadian.

The superhero, who is said to have fallen to earth to be raised by a Kansas farm family, made his debut in a different comic book series, Action Comics No. 1, in 1938. An image of that first sighting — of Superman breaking loose the chains that bind him — graces the reverse of Canada’s Proof Vintage .9999 fine silver $10 coin. Superman fans know that the image was also placed on the back cover of the Superman No. 1.

While the Action Comics No. 1 comic book can bring tremendous sums, ranging from $175,000 for a poor example to $2.16 million for a near-perfect example (sold Nov. 30, 2011, through ComicConnect.com), the Superman No. 1 comic is also desirable in its own right. A damaged and conserved example sold in Heritage Auctions’ May 16 auction for $20,574.32, including the buyer’s fee.

A current image of Superman appears on the Proof Modern Day .9999 fine silver $15 coin. A full color image of the Man of Steel leaps from the background, evoking the thrilling action of Superman in full flight. The $15 coin has a mintage limit of 15,000 pieces. It retails for $69.75 each.

Three Proof .9999 fine silver $20 coins are part of the Superman 75th Anniversary program, each offering color in the design.

One coin, dubbed the Man of Steel, shows the cover of Superman No. 204, a Jim Lee illustration of the superhero standing guard over Metropolis, Superman’s chiseled physique and flowing red cape enhanced by color over an engraved relief.

Few brand icons are as recognizable at the Superman S-shield, which graces the reverse of the Shield silver $20 coin.

In a technological breakthrough, the RCM’s Metropolis silver $20 coin is the world’s first coin to feature an achromatic hologram, which the RCM said relies on nanotechnology-based imaging.

The technology was developed for passports and other high security documents.

“Set against a conventional hologram showing the Daily Planet building and the Metropolis skyline, the achromatic hologram of Superman flying over Metropolis creates the impression that he is flying out of the coin,” according to the RCM.

The highest-denomination coin in the program is a Proof .583 fine gold $75 coin celebrating “The Early Years.”

The reverse image shows Superman soaring over Metropolis as Shuster pictured him on the front cover of the Superman No. 1 comic book. Framing the scene is an engraved rendering of Superman’s crystalline Fortress of Solitude.

The coins are available for purchase to only customers with U.S. or Canadian addresses.

The U.S. prices for collectors in the United States buying from the RCM fluctuate with the exchange rate of U.S. and Canadian dollars, and are set at the time of purchase.