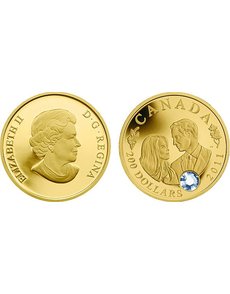 The Royal Canadian Mint celebrates the June 30 to July 8 royal visit of the Duke and Duchess of Cambridge on a new Proof .9167 fine gold $200 coin with a white Swarovski crystal embedded on the reverse. The release marks two months since the April 29 wedding date.

Two months after their wedding, and the day before arriving in Canada for their first royal tour as a married couple, the Duke and Duchess of Cambridge are celebrated on a new collector coin from the Royal Canadian Mint.

On June 29, one day before Prince William of Wales and Catherine Middleton were set to arrive in Ottawa, Ontario, for a nine-day tour, the RCM began selling a Proof .9167 fine gold $200 coin featuring the couple.

The coin is ostensibly issued to mark the wedding, but the timing and the RCM’s website suggest the RCM is playing off the publicity surrounding the royal visit, which includes stops in four provinces and one territory and a naturalization ceremony on July 1, Canada Day.

The reverse of the $200 coin, which features a white Swarovski crystal, bears a portrait of the bride and groom with maple leaves and a stylized Tudor rose in a design by Laurie McGaw.

It features the same design issued on a Proof .9999 fine silver $20 coin issued earlier this year for the wedding. The silver coin, with a mintage limit of 25,000 pieces, has sold out.

Though on sale now, the gold coin will not be delivered until July 21 at the earliest, according to the RCM.