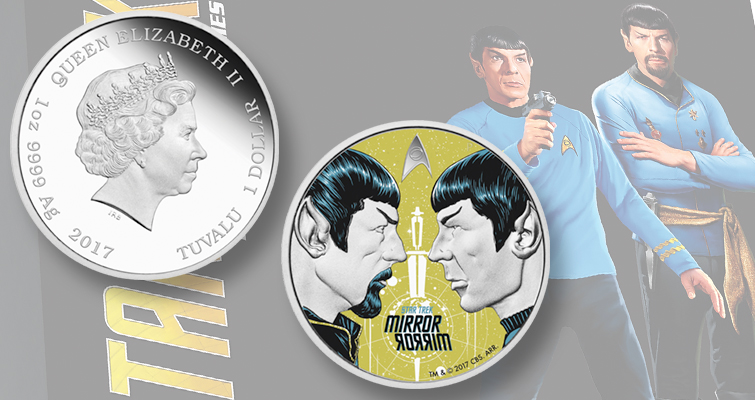 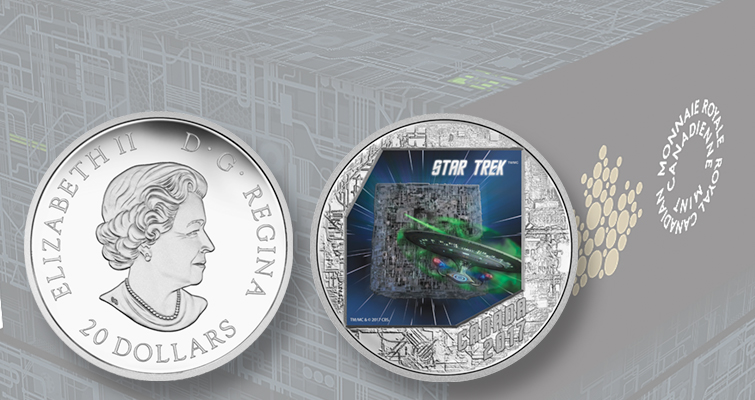 The Star Trek franchise is one of the most popular science-fiction properties.

The Perth Mint has issued a Proof .9999 fine silver dollar for Tuvalu showcasing an episode in the original program, “Mirror, Mirror.”

One of Star Trek’s most iconic episodes, “Mirror, Mirror” aired for the first time in 1967 during the second season of Star Trek: The Original Series.

The episode uses the evil counterparts of some of Star Trek’s most beloved characters to explore the darker side of humanity and the premise that everyone has two sides to their personality.

The coin’s obverse depicts the Ian Rank-Broadley effigy of Queen Elizabeth II, the denomination, and 2017.

Designer Jennifer McKenna created the reverse, which portrays a color image of mirror Spock and Spock prime facing each other as they appear in “Mirror, Mirror.”

The two Spocks appear against a backdrop of the planet Earth bisected by a sword. The design also includes Spock’s uniform insignia and the Perth Mint’s traditional P Mint mark.

One of the RCM’s newest coins celebrates the 30th anniversary of the debut of Star Trek: The Next Generation.

The award-winning television series introduced an unforgettable cast of characters, including one of the most feared antagonists: the Borg, subject of a new Canadian Proof .9999 fine silver $10 coin.

The reverse design combines color and engraving for a tribute to the 30th anniversary of Star Trek: The Next Generation. The field includes a close-up of a Borg cube vessel. Against this engraved background, a colorful depiction of a tension-filled scene finds a Borg cube locking onto the USS Enterprise with its green tractor beam, as part of their pursuit to assimilate technology, worlds and even beings. The reverse also includes the words STAR TREK, CANADA and the year 2017, all engraved in a Star Trek font. 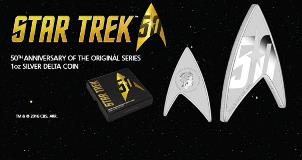 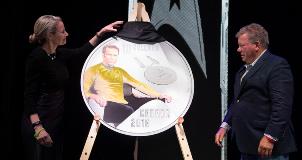