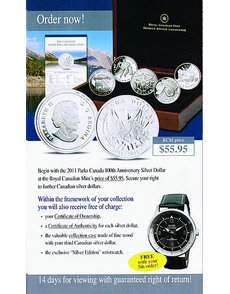 Front of Royal Canadian Mint brochure depicts silver dollars from the 1980s and 1990s it plans to offer in a subscription program.

Some Canadians who ordered the new silver $20 coin at face value on the Royal Canadian Mint Web site were surprised when they received their order by mail because it included a special offer to buy the new 2011 Parks Canada Proof silver dollar and an invitation to join a subscription program for coins issued in the 1980s and 1990s.

The 2011 silver dollar was offered at $55.95 Canadian, plus shipping, handling and taxes.

A letter signed by the Mint’s Chief Operating Officer, Beverley A. Lepine, explained: “If you decide to keep your 2011 Parks Canada Silver Dollar, we will add your name to the reservation list for the commemorative silver dollar subscription. Once a month, you’ll receive your next silver dollar coin in the subscription series. ...”

An enclosed three-leaf color brochure identifies the next six pieces in the program as:

Lepine’s letter further states: “With your third coin you will receive, free of charge, an attractive Coin Case [sic] to store your valuable collection. When you purchase your fifth coin, you will also receive an exclusive gift: a Silver Edition Wristwatch — a masterpiece of precision and beauty.”

RCM spokesman Alexandre Reeves said, “The Mint is always looking for innovative ways to interest people in our numismatic products and we feel this new subscription offer could ignite a passion for coin collecting among our customers.”

An informal survey of collectors who ordered the $20 face-value coin suggests that the subscription program offer was only sent to those that may have been identified as a “new customer” at the time of ordering.

Longtime Canadian collector Rick Faucher said, “I will never sign up for this, neither would I recommend it,” citing the facts that “the coins from 1971 to 1991 are .500 silver not sterling” (.925 fine) and that “all these coins are readily available, in their original packaging, at local coin dealers at significantly reduced prices” from what the RCM is charging.

Current retail guides for Canadian coins such as the 2010 Charlton Standard Catalogue of Canadian Coins, Volume Two, Collector Issues lists the older coins in the subscription plan in Mint State 68 in a value range from $14 to $30 Canadian.

Faucher questioned the RCM’s approach. “The majority of collectors that have purchased these coins in the 1980s and 1990s feel that this has been a very bad investment as the resell value is slightly over bullion value. What will happen if these new collectors decide to sell these pieces?”

He and others point out that many collectors have experienced a rude awakening in the past when they realized they overpaid for new issues. They note that some left the hobby while others remained.

Even if these new collectors are not overpaying, the seasoned collectors point out that the coin box and watch “are not free.”

In response an inquiry about its decision to purchase earlier commemorative silver dollars in the secondary market and become a retailer through its subscription program to new customers, the RCM stated in an e-mail:

“There are many factors involved in pricing this offer; including the Mint acquiring and re-packaging the best available coins from the secondary market, and marketing to new customers a ready-made, carefully prepared collection of high-quality Canadian silver coins.” ¦