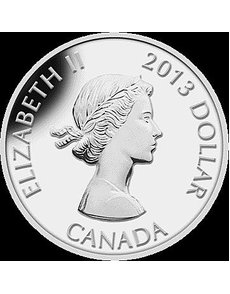 The obverse of the new silver dollar carries the Mary Gillick effigy of Queen Elizabeth II that was used for the Korea Medal (and for coins then in circulation) but lacks most of the legend from the medal. 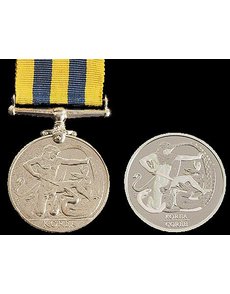 Canada’s new Proof silver dollar, right, recalls the Korean War by replicating the designs for the Korea Medal, above left, bestowed on military members who fought in the conflict. On the reverse of each, shown, Hercules slays a monster.

Canada’s silver dollar marking the Korean War armistice anniversary may be easier to obtain than the medal that inspired its design, considering that many recipients of the Korea Medal faced the danger of combat.

On July 9 the Royal Canadian Mint launched a Proof silver dollar commemorating the 60th anniversary of the armistice of July 27, 1953, which was achieved after more than three years of conflict.

The coin’s obverse and reverse feature adaptations of the designs on the Korea Medal awarded to all Commonwealth forces who served in the war.

Canada’s version of the medal, having the national name added below the obverse effigy of Queen Elizabeth II by Mary Gillick, was presented to more than 27,000 Canadian service personnel who were involved in the conflict, according to the RCM’s 1954 annual report. The RCM struck the Canadian medals.

The medal’s obverse legends were replaced on the coin obverse with the year date and denomination; the queen’s name appears on both.

On the coin’s reverse, RCM engravers added the word CORÉE below KOREA to reflect Canada’s official bilingualism (only KOREA appears on the medal).

The coin retails for $69.95 Canadian. The RCM said it will donate $10 from the sale of each coin to Canadian Korean War Veteran organizations.

The U.S. prices for collectors in the United States buying from the RCM fluctuate with the exchange rate of the U.S. and Canadian dollars at the time of purchase.

Two RCM distributors in the U.S. carry the coin at fixed prices in U.S. dollars.

Gatewest Coin Ltd., and Talisman Coins are all official distributors for the RCM.

Order from Talisman through www.talismancoins.com. ¦