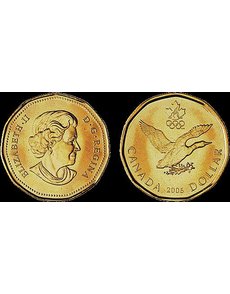 An earlier “Lucky Loonie,” from 2006, also depicts a new design of a Loon, the bird that has appeared on the aureate bronze dollar since 1987. 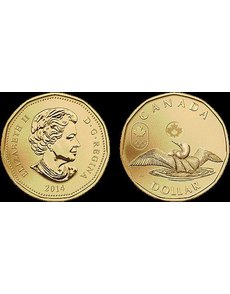 The 2014 “Lucky Loonie” dollar commemorates the Canadian athletes that will be participating in the 2014 Winter Olympic Games in Sochi, Russia.

An Olympic coinage tradition will continue in Canada.

The Royal Canadian Mint will circulate a special 2014 dollar coin commemorating the 2014 Winter Olympic Games, which are scheduled to be held in Sochi, Russia, from Feb. 7 to 23.

The 2014 coin was announced and the design unveiled on Jan. 11 at the Canadian Olympic Team’s Sochi Block Party event in Banff. A total of 5 million coins will enter circulation beginning Jan. 20.

The reverse of the coin will depict a loon spreading its wings while sitting on Canadian lake waters.

Four of five Olympic circulating dollar coins since Canada launched its first “Lucky Loonie” in circulation a decade ago have shown a loon, the usual occupant of the design space on the regular version of the denomination. Only the loon-free 2010 Lucky Loonie aureate bronze dollar, marking the Vancouver Winter Olympics, deviates from the tried-and-true formula for a legend that was born in 2002 in Salt Lake City.

The icemaker in 2002 buried a Canadian dollar below center ice as a lucky charm for men and women’s teams from Canada. Both teams went on to claim gold medal victories, and the RCM soon offered collector coins celebrating the “Lucky Loonie.”

The legend of the “Lucky Loonie” is so large in Canadian sporting lore that the original coin that was present at the 2002 Olympics is now on display at the Hockey Hall of Fame in Toronto.

Every two years, starting in 2004, the RCM has circulated a dollar coin to mark the Olympics. Collector products including silver versions continuing the theme have been part of the Lucky Loonie program for many of those Games. Usually, each athlete competing in the Games is given an example to carry.

Upon arrival in Sochi, each Canadian Olympian will receive a 2014 Lucky Loonie, according to the RCM.

The 2014 coin will show the Susanna Blunt effigy of Queen Elizabeth II on the obverse.

The 2014 coin will also include a lasermark maple leaf symbol within a circle above the loon, the Canadian Olympic Committee symbol, and the artist’s initials ED, representing Emily Damstra, a wildlife artist who has produced several coin designs for the RCM.

A Reverse Proof .9999 fine silver version that is also 12-sided is being released to commemorate the Games. In addition to bearing Damstra’s design on the reverse, the coin features the Canadian Olympic logo (a maple leaf above the Olympic rings in an oval) in full color.

The silver coin weighs 7.89 grams and measures 26.5 millimeters in diameter. It has a mintage limit of 15,000 pieces and sells for $39.95 each. The silver collectors coin will be issued Feb. 4 and is available only inside Canada.

Only Canadian residents currently may order packs of five 2014 circulation-strike coins, which are priced at face value plus shipping. The coins are available at www.mint.ca/luckyloonie, and limited to three packs per household.

Collectors elsewhere will have to search the secondary market to obtain both the circulating $1 and the collector version. ¦