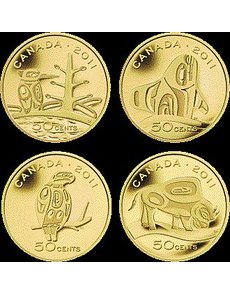 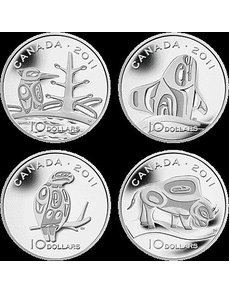 Artist Corinne Hunt’s designs, used for both gold 50-cent and silver $10 coins, were inspired by Canada’s First Nations people. The Proof .9999 fine silver $10 coins, shown above, were released Nov. 1 as part of a series related to circulating coins with the same theme.

When the Royal Canadian Mint on Oct. 7 announced a new series of circulating 25-cent, $1 and $2 coins to honor the nation’s boreal forests, national parks and wildlife, RCM officials promised collector coins with the same themes.

Although the circulating and noncirculating coins share themes, they do not share commemorative designs. The RCM commissioned artist Corinne Hunt to provide new perspectives for the Boreal Forest, Orca Whale, Peregrine Falcon and Wood Bison gold 50-cent and silver $10 coins. Though the themes are similar, Hunt’s designs are markedly different from those for the coins entering circulation, which are being issued in both colorful and standard (plain) versions. For the circulating program, the animals are honored on individual circulating 25-cent coins, while the boreal forest is the subject of a circulating $2 coin (Coin World, Oct. 24 issue).

The coin designs from Hunt, a British Columbia artist who also designed the 2010 Vancouver Olympic Games athlete medals, interpret traditional forms from artwork of First Nations’ people like the Kwakwaka’wakw and Tlingit.

The designs capture the beauty of Canada’s boreal forest, one of the world’s largest ecosystems, as well as the majesty of three Canadian animal species that are conservation success stories in Canada.

The reverse design of the Canadian Boreal Forest coins depicts a stylized kingfisher overlooking a pine tree. Four ovoid shapes, symbolizing regeneration, line the ground, and the ends of the tree branches represent the forest’s cycles of life, death and rebirth.

The depictions of the wood bison, orca and peregrine falcon are rich in symbolism as well, with each animal’s body incorporating an ovoid representing, per coin, the life and the seed of the future for the wood bison; the many generations, past and present, of the community in which the orca thrives; and the symbol of birth and rebirth on the peregrine falcon.

Like half of their circulating counterparts, the silver versions sport a splash of color on the reverse.

The Proof silver 25-cent coins are available only as part of a three-coin set dubbed Canadian Conservation Successes.

Also revealed in the Nov. 1 recent launch is a set providing collectors with Uncirculated examples of all six examples of the three circulating 25-cent coins (three with color, three without), joined by examples of the National Parks $1 and Boreal Forest $2 coins.

The coins in the set are struck with the standard compositions and physical specifications of the respective denominations.

A total of 20,000 Special Edition Uncirculated sets are being issued, with an issue price of $23.95 each.

For more information about the coins, visit www.mint.ca. ¦