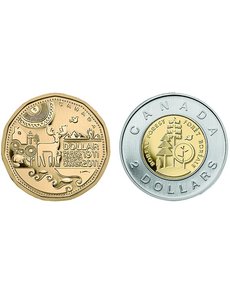 Canada is releasing circulating commemorative $1 and $2 coins honoring the centennial of Parks Canada and the nation’s vast boreal forest, respectively. 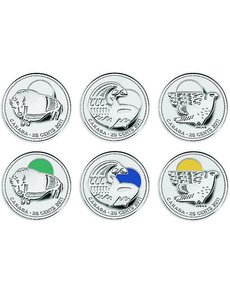 Three new 25-cent coins honoring the wood bison, orca and peregrine falcon will be offered with a splash of color. Green will fill the moon on the Wood Bison coin, while blue graces the Orca coin and yellow appears with the Falcon coin.

A new series of circulating commemorative coins from Canada heralds an innovation in coining capabilities.

Though Royal Canadian Mint officials are mum about the process involved, three new 25-cent coins, which were announced Oct. 7 as part of a larger program, expand the RCM’s offerings of colorful circulating coins.

The new eight-coin series, whose release into circulation is being staggered to extend to April 2012, honors Canadian nature and wildlife. Silver and gold collector versions will be announced in November, according to the RCM.

The RCM will release in 2012 six 2011 25-cent coins (bearing three designs, issued in two versions each), and it has already released a 2011 $1 coin and a 2011 $2 coin in the series. Three of the 25-cent coins will feature a colorful application on their designs. The colors themselves, and not the application of color, are noteworthy: the green, yellow and blue that are added to the coins, one color per design, are a significant shift from the red and pink hues applied on earlier colorful circulating commemorative Canadian coins.

None of the colorful coins will enter circulation for months.

Leading the series, entering circulation Oct. 7, is a dollar honoring the centennial of Parks Canada, which was already the subject of the RCM’s annual silver dollar for 2011.

The busy design features “stylized land, air and aquatic fauna, varieties of flora, as well as a symbolic park building and the silhouette of a hiker framed by a snow-capped mountain range,” according to the RCM. Those images include a stylized sun, trees, flowers, a beaver, two deer, water with fish and a bird in flight.

The Parks Canada dollar has a mintage of 5 million coins.

The $2 coin, which celebrates Canada’s boreal forests, coincides with the United Nations’ declaration of 2011 as the International Year of the Forest.

The boreal forest (the world’s largest ecosystem) covers more than half of Canada’s landmass. An artistic interpretation of the boreal forest includes “coniferous and hardy deciduous trees adapted to long winters and short growing seasons.” A lone figure of a human to the left is joined by a bird in flight above the scene and the inscription boreal forest and its French equivalent, forét boréale.

A mintage of 5 million $2 coins is set to enter circulation sometime in November.

The 25-cent coins feature the stylized representations of the wood bison, orca and peregrine falcon. Two versions of each coin will be released, one unadorned and the other with added color. The colorful versions of the Falcon coin will feature a yellow crescent, a blue crescent will appear on the Whale coin and a green crescent on the Bison coin.

A total of 12.5 million each of the 25-cent coins are to be issued, with mintage split equally between the colorful and standard versions.

Both versions of the Wood Bison coins are scheduled for a February launch, with the Orca coins following in March and the Peregrine Falcon coins wrapping up the series in April, meaning that all three coins, though dated 2011, won’t enter circulation until 2012.

All of the Parks Canada coins are the standard alloy, size and weight of the current circulating denominations, but little else is standard, from the avant-garde designs to the expansion of the RCM’s use of color on circulating coins.

However, the RCM has downplayed the aspect of color in press releases prepared for the Oct. 7 unveiling.

All of the colorful Canadian circulating commemoratives, incidentally, have been denominated 25 cents.

In 2004 the RCM became the first (and only, apparently so far) national mint in the world to issue a colorful circulating coin.

Though color has been applied to coins for years, those coins have been collector-oriented and sold at significant premiums over their face value.

The 2004 coin Remembrance Day 25-cent coin features a red poppy; soon after it was launched some media in Canada noted the relative ease at rubbing the color off, but by the time the RCM in 2006 honored breast cancer awareness with a pink ribbon against a white background, RCM officials said a new process had solved the riddle. Subsequently, no such reports have plagued the issuance of the colorful coins in 2006, 2008, 2009 and 2010, all bearing red.

The 2008 coin also sports a red poppy, while the 2010 coin raised the bar with two red poppies. In 2009, the RCM issued colorful examples of three “Olympic Moments” 25-cent coins, which were simultaneously issued with much larger quantities of standard (or “plain”) versions lacking color. The RCM in 2008 also extended use of color for circulating coins to a 50-toea coin of Papua New Guinea.

Alexandre Reeves, senior manager of communications for the RCM, has not responded to Coin World’s questions about how the colors on the coins to be released in 2012 stand up to circulation wear compared to the earlier issues, how long the process to develop the additional colors took, and any lessons learned during research and development.

The RCM did not identify a designer for the reverses in this new series, and no initials are visible on the design images released by the RCM.

The RCM unveiled the series at the Canadian Museum of Civilization in Gatineau, Quebec, which was followed by a coin exchange where examples of the $1 coin were available at face value. Additional, similar exchanges were scheduled Oct. 7 and 8 at the RCM’s boutiques in Ottawa, Winnipeg and Vancouver.

Coin World will continue to report on the series as news develops. ¦