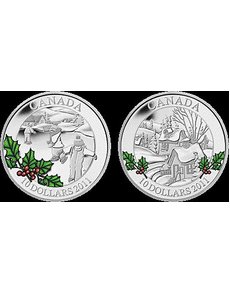 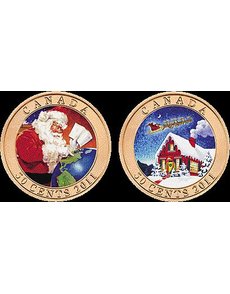 Canada’s annual lenticular holiday coin features a scene with Santa checking his list and plotting his route, or high in the sky above a festive house awaiting his arrival. The scenes shift as the coin is tilted.

The RCM on Oct. 11 launched the annual 50-cent lenticular coin, which has a Gifts From Santa theme for 2011.

Three young skaters glide across a frozen landscape set against an idyllic, snowy winter scene on the Little Skaters coin. “Since ice-skating was first introduced to North America in the 18th century, learning to skate has been a coming-of-age ritual for millions of Canadian children,” according to the RCM.

Boulay shows “a sleepy snow-covered town” after the first snowfall of the season in a scene on the Wintertown coin.

The addition of painted green holly leaves and red berries at the lower left help frame the scenes.

Those two coins follow the Oct. 11 launch of the annual 50-cent lenticular coin, with its 2011 Gifts from Santa theme.

Throughout North America and Europe, Santa Claus and his famous toy workshop are cornerstones of Christmas folklore and legend.

Thanks to the lenticular technology, alternating scenes of Santa are visible when the coin is tilted. One scene shows Santa reviewing his “naughty-or-nice” list while plotting his course, while the other scene shows Santa flying in a sleigh led by reindeer above a festively decorated house.

The fifth in an annual series of lenticular coins with a Christmas or winter theme, the 2011 edition is the first to feature copper-plating over steel.

The Susanna Blunt effigy appears on the obverse of all three coins.