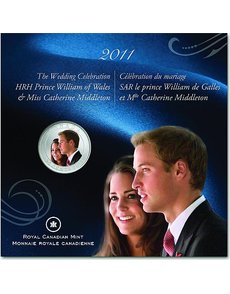 One of the most popularly purchased items at the Royal Canadian Mint’s boutique was this folder containing the 25-cent coin that commemorates the wedding of the Duke and Duchess of Cambridge. 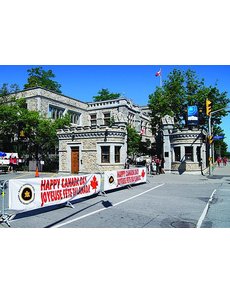 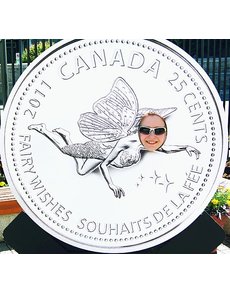 Always popular, large cut-outs of Canadian coins positioned in front of the RCM’s front door give visitors an opportunity to be on coins. Ottawa resident Catherine Pelletier imagined she would be bringing a smile to many kids’ faces as the tooth fairy. 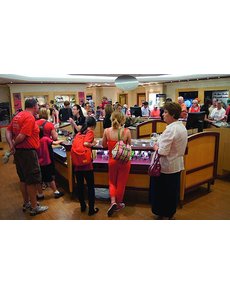 Visitors who took advantage of the free catwalk RCM visit could take a closer look at the Mint’s products in the boutique. 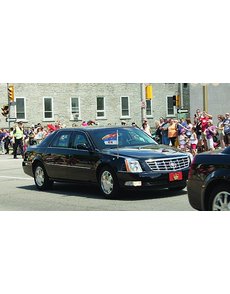 The Duke and Duchess of Cambridge passed RCM’s facility several times. While the couple is not visible in this photo, the car can be identified as theirs because it is flying Prince William’s Canadian standard.

Excitement was in the air July 1 in the Canadian capital of Ottawa. Yes, it was Canada Day, but Ottawa residents and visitors were even more excited than usual because Canada had special guests for the festivities, the most famous of newlyweds — the Duke and Duchess of Cambridge, known around the world as “Will and Kate.”

With the couple’s visit, the Royal Canadian Mint decided to give a royal flavor to its Canada Day activities. It addition to the traditional free face painting and catwalk tours of the facility, the RCM put on display some of its most beautiful coins that celebrate Canada’s close ties with the British and Canadian royalty.

The tent also included three display cases containing, among others, three gold $300 coins and a coin featuring the Great Seal of Canada, issued in 2003. A guest book in which visitors were asked to leave messages for the royal visitors was at the side of the tent.

Inside, visitors were treated to the RCM’s 25-minute catwalk tour, which led to the boutique. There, they could examine this year’s RCM products. The the most popularly purchased item appeared to be the colored 25-cent coin that commemorates the wedding of the Duke and Duchess of Cambridge.

Some RCM visitors got a glimpse of Prince William and his bride as they drove past the Mint on their way to the Canada Day celebrations. The RCM’s location on Sussex Drive places it on the route between Rideau Hall (the residence of the governor general of Canada), where all royal visitors stay, and Parliament Hill, where the official celebrations were held.

Visitors and bystanders alike could partake of a hot dog or hamburger just outside the RCM’s gates at a barbecue set up for the occasion. Farrah-May Gendron, the RCM’s special events coordinator, donned an apron and acted as the short-order cook. Proceeds from the sales of festivities staples were donated to the Government of Canada Workplace Charitable Campaign, a campaign through which federal public servants can support registered Canadian charities of their choosing.

The superb weather — sunny, in the mid-80s with a light breeze — was the crowning jewel of the day and contributed to make it a most memorable event. The number of RCM visitors was not immediately available; however, more than 300,000 people (three times the normal attendance) took part in the noon and evening Canada Day shows on Parliament Hill, with most attending only one of the shows. ¦