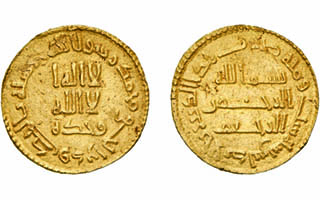 One of two known examples of an Umayyad dinar with the mint name al-Andalus (the Arabic name for Spain) and dated A.H. 106 (A.D. 724) highlights Morton & Eden’s April 10 auction in London.

An important group of some of the rarest and most historic gold coins from Muslim Spain will be sold by specialist auctioneer Morton & Eden in its April 10 auction, “Important Coins of the Islamic World,” to be held at Sotheby’s in London.

The Umayyads and their descendants ruled Spain for almost three centuries.

An extremely rare dinar dated A.H. 415 (1024) is an example of one of the very last gold coins struck before the fall of the Umayyad dynasty seven years later, believed to be only the second recorded example of this date.

After the Umayyads, control of Muslim Spain was split between a number of petty kingdoms and rulers, of whom the Almoravids were among the most important.

Their coins are celebrated for the calligraphy, as shown by an example in the auction, a gold dinar struck at Seville (Arabic Ishbiliya) in the year A.H. 539 (1144).