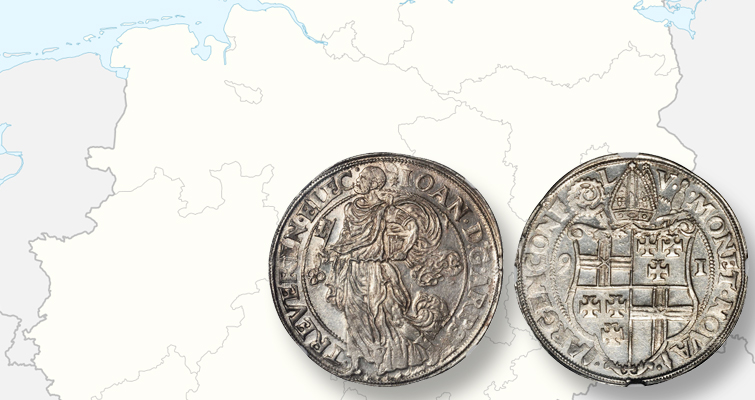 A rare, “possibly unique,” silver taler of Trier, was issued in 1591 by Johann von Schönenberg, the archbishop-elector of Trier.

A rare, possibly unique, 1591 silver taler from Trier, Germany, is one of many world coin highlights in Stack’s Bowers and Ponterio’s Aug. 12, 14 and 17 world coin auction.

The piece, graded Mint State 62 by Numismatic Guaranty Corp., was issued by Archbishop-Elector of Trier Johann VII at the height of the Trier witch trials.

The large silver taler depicts Saint Peter striding left with the key to heaven on the obverse. The reverse depicts a mitre (ceremonial headgear of a Catholic bishop) atop the combined arms of Trier and Schönenberg.

An admirer of Jesuits and leading figure in the counter-reformation, Johann von Schönenberg led the mass killing of 368 people in cities and towns surrounding Trier, with perhaps as many as 1,000 victims in the diocese eventually executed, according to research cited by the firm.

“No one was immune from the accusation of witchcraft and sorcery, with a third of the victims coming from nobility, though special emphasis was directed towards Jews and Protestants,” the cataloger wrote. “Much of the slaughter was driven purely from greed, as examiner and executioner alike prospered from seized property of the accused.”

To learn about all lots in the auction, visit the firm’s website.

Want to learn about other talers? Coin World has you covered!