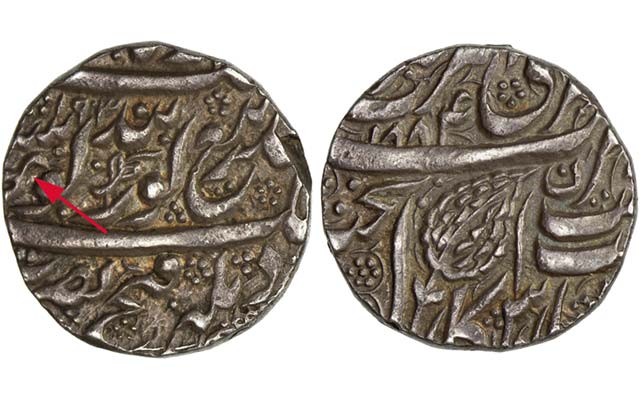 An extremely rare silver rupee from Amritsar, India, issued during the Sikh Empire, realized $8,000 in a May 14 and 15 auction. It is only the second known example bearing the bird, arrow.

What makes the coin so special is the rarely-seen bird at the left side of the obverse field. According to Stephen Album, an expert in the series, as far as he knows only one other example that shows the bird is known in the hobby.

“Apparently a lot of people wanted [an example] with the bird,” Album said.

The bird is a regular part of the design on the obverse die; however, minting technology and practices in the empire resulted in the bird rarely appearing on the coins. Issuers used increasingly larger dies, even larger than the coins themselves, and the size of rupees varied from mint to mint, Album said.

The size of the planchets and their apparently random placement between the oversized dies resulted in coins with incomplete designs. The position of the bird at the design periphery made its inclusion on the coins unlikely given the minting processes involved. Only about 60 percent of the bird is present on the example sold by Album.

The coin was graded Extremely Fine by the auction house. The buyer’s fee ranges from 17.5 to 19.5 percent, depending on payment method.

The auction was held at the firm’s offices in Santa Rosa, Calif. The company’s next auction is scheduled for Sept. 10 and 11, 2015. For additional information, visit the firm’s website.