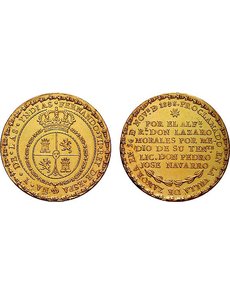 A collection of nearly 300 high-grade Spanish gold 8-escudo coins highlights a pair of auctions conducted Sept. 15 and 16 by Madrid-based Cayon.

The auctions feature approximately 5,000 lots of coins and are being conducted at two different venues.

Approximately 2,270 lots of Spanish and Spanish colonial coins are scheduled to be offered in the Sept. 15 auction, slated to be held at the Ritz Hotel, Madrid. Though gold 8-real coins comprise a significant offering in the auction, one of the main highlights is an 1808 gold proclamation medal from the town of Zamora in Mexico, issued while the town was under Spanish colonial rule.

Unlisted in gold (according to three references on Spanish proclamation medals), the medal is “by far ... the most important proclamation [medal Cayon has] ever had over 25 years,” according to Juan Cayon of the firm.

To validate the medal, the firm firm cites contemporary documents from Rafael España, who was notary public in the Mexican town when news arrived of Fernando VII’s ascension to the throne upon the abdication of Charles IV, his father.

Proclamation medals are medals that were issued by individuals and municipalities upon the accession to the throne of new Spanish kings, thus the pieces proclaim the new leadership in effect. They were issued in Spain as well as its colonies.

For Fernando VII’s ascension, Zamoran authorities began planning a lavish party, according to España’s account, slated for Nov. 26, 1808, several months after the official word of the abdication had arrived. Plans includes general “sprucing up” of the city, with houses being painted and streets well-lit, as well as an official painting to be revealed at the party.

Proclamation day was for some unknown reason held Nov. 27, one day late (the medal shows the initially planned date, Nov. 26).

At 4 p.m., there was a salute to the new king and the unveiling of the painting, followed by a ringing of bells in the city and lighting of fireworks.

Military leader Lázaro Morales (one of two military rulers referenced on the reverse of the medal) distributed most of the medals into the crowd (the rest were distributed later during further festivities), and a specially commissioned band began playing.

The celebration continued over several days and included a mass, multiple meals, dancing, the freeing of some prisoners and more fireworks.

The 40-millimeter medal is a rare reminder of the celebration for the new ruler. It features the coat of arms of Spain, within a collar of the Order of the Golden Fleece, on the obverse, while the reverse bears text legends relating to the proclamation.

Though versions are known in silver and also in bronze, the gold version was never recorded, according to Cayon.

The example in Cayon’s auction is Uncirculated. It is one of 626 lots of Fernando VII-related coins and medals in the Sept. 15 auction. Three other Bourbon rulers — Carlos III, Carlos IV and Isabel II — are well-represented in this auction, along with Fernando VII forming “one of the best and most complete” collections of these series offered “in an auction, including gold, silver and minor series,” according to Cayon. The collection was created by a collector “with a good eye” for grading the gold series, Cayon said; the coins are “really attractive and have original luster.”

A total of 1,125 lots of 19th and 20th century issues, including modern (1868-forward) coins follows. The group of Queen Isabel coins represents almost all dates and mints from minor to gold coins, including key coins from mints in Barcelona, Madrid and Sevilla.

The second auction offers ancient and world coins and as well as Spanish paper money, and more Spanish and Spanish colonial coins. It is scheduled for Sept. 16, at the Convencion Hotel, Madrid, where a coin show organized by the Spanish Professional Numismatists Association is also scheduled.

More than 200 lots of ancient coins lead the day’s auction, with several dozen lots of paper money. Following are more than 1,100 lots of Spanish and Spanish Colonial coins.

Lot listings can be accessed through the firm’s website, www.cayon.com, or through www.sixbid.com, which will permit live bidding for the auction.

Cayon also announces that the firm has become, as far as it knows, the first auction house in the world to launch a version of its website accessible through tablets (like the iPad). That site is m.cayon.com.