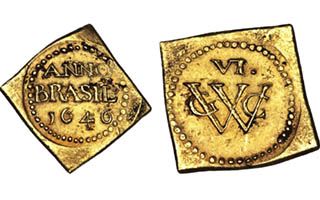 A Dutch effort at colonizing Brazil in the 1600s ultimately failed, but left a legacy of emergency coinage for collectors.

An example of the Brazilian 1646 gold 3-florin ducat (60 stuivers), struck by the Geoctroyeede West-Indische Compagnie (Dutch West India Company) in what is now the Pernambuco region in Brazil, highlights Heritage Auctions’ April 10 to 12 auction in Chicago.

The coin weighs 1.78 grams. It is “essentially Mint State” in grade, with a small planchet crack, according to the auction house.

The Dutch invaded the Portuguese-held northeast coast of Brazil in 1630, intent on establishing a colonial presence in South America. The Dutch waged battles against the Portuguese colonialists for many years. By the mid-1640s, the Dutch guilder was extremely scarce in the area controlled by the Dutch, until the galleon Zeeland reached port in Recife in September of 1645, carrying gold from Africa. The GWC used some of the precious metal and struck 3-, 6- and 12-guilder (florin) coins.

Today perhaps between 50 and 60 examples of all denominations and years of these emergency coins are known, with roughly 30 percent of them in museums.

After the Dutch surrendered to the Portuguese in early 1654, most of the coins were melted.

The example in the forthcoming auction is estimated at $30,000 and up.

To bid on the lot, or for more information about the auction, visit http://coins.ha.com or telephone Heritage Auctions toll free at 800-872-6467.