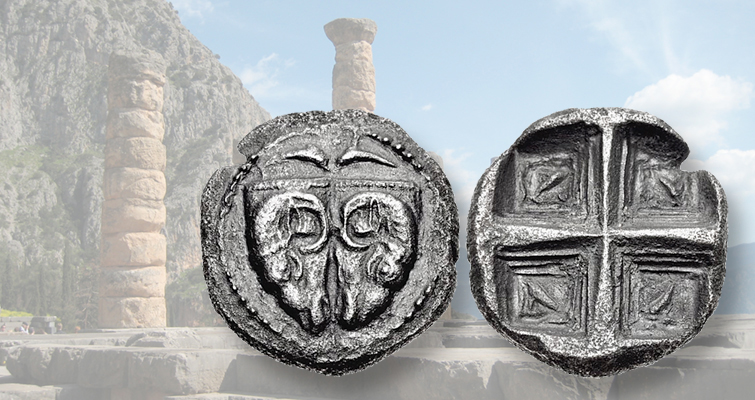 One of 14 examples of a silver tridrachm of Delphi sold in Classical Numismatic Group’s May 10 auction.

A rare silver ancient Greek coin, discovered 50 years ago in a hoard in Egypt, has just sold.

Classical Numismatic Group sold the circa 479 to 475 B.C. silver tridrachm from the city of Delphi, in the region of Phokis, during its Internet and mail-bid auction that closed May 10.

The obverse depicts a pair of rhyta (drinking vessels) in the form of rams’ heads, with two dolphins above. The reverse shows a four-part incuse square, resembling a coffered ceiling, each quadrant featuring a dolphin.

The coin is one of 14 known tridrachms of Delphi, and one of the two with a reverse arrangement giving the appearance the dolphins are swimming in a clockwise circle.

The Ghazzat Hoard was found in the sea off the coast of Gaza in the 1960s.

The obverse is a reference to the Greek victory over the Persians at Plataea in 479, when the Greeks captured an enormous booty, the rhyta among it. They must have been brought as a dedication to Apollo in Delphi  (rams were sacred to Apollo, along with dolphins).

The reverse is unusual because of the coffered ceilings, which would have decorated ancient buildings like the Temple of Apollo. The dolphins ornamenting these coffers refer to both Delphi and the fact that Apollo could appear as a dolphin. 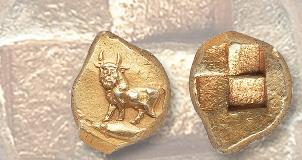 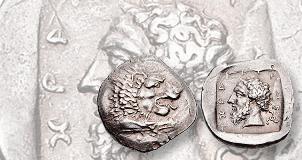 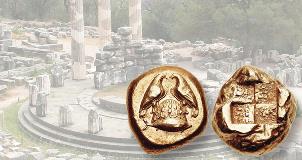