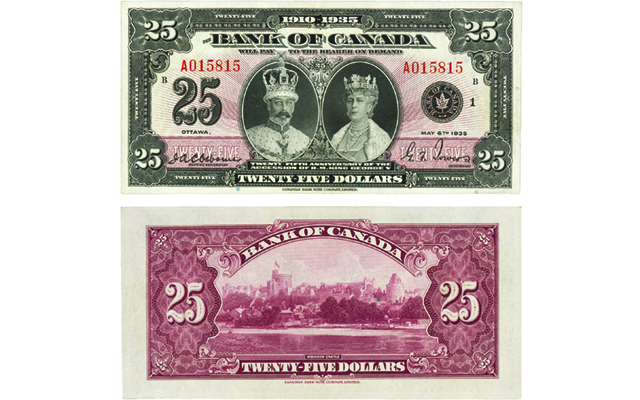 This English-language version of a Bank of Canada $25 commemorative note issued in 1935 will be offered by Stack's Bowers Galleries during its official auction at the ANA World's Fair of Money Aug. 5 to 9.

A 1935 $25 commemorative note produced by the Bank of Canada will be among the highlights offered by Stack’s Bowers Galleries during its auction held in conjunction with the American Numismatic Association World’s Fair of Money Aug. 5 to 9 in Rosemont, Ill.

According to information from Matt Quinn, assistant director of currency at Stack’s Bowers, the note “features one of the most truly iconic designs used on Canadian paper money.”

The face of the note features portraits of King George V and Queen Mary and was issued to mark the king’s Silver Jubilee. Under their portraits is the inscription TWENTY-FIFTH ANNIVERSARY OF THE ACCESSION OF H.M. KING GEORGE V.

The back of the note has a vignette of Windsor Castle seen from across the Thames River. English and French versions of the $25 commemorative notes were printed. The French language notes are rarer than the English notes.

The notes bear the issuance date as May 6, 1935, but the 26th edition of the Charlton Standard Catalogue of Canadian Government Paper Money, indicates the banks were instructed to release the notes on May 2, four days before their printed issue date.

The short-lived 1935 series was replaced with notes of Series 1937. The $25 denomination has seldom been used by any country, according to Quinn.

According to the Charlton reference, a total of  160,000 English and French language notes were issued with a total of 1,840 notes still outstanding in 2005.

For more information about the note, visit the Stack's Bowers website.